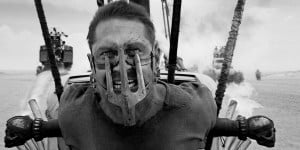 Here’s the good news: we finally know when you can see the long-promised black & white version of George Miller’s stunning Mad Max: Fury Road. The bad news? You can’t see it on the big screen. It’s coming straight to home video through the forthcoming Mad Max: High-Octane Collection, set to be released on Blu-Ray and DVD on December 6. It’s a special feature entitled Mad Max: Fury Road Black & Chrome Edition. The box set also includes the other four films, if you’re interested. Why wouldn’t you be?

If you’re not looking to spend $79.99 or $54.97 to buy the Blu-Ray or DVD collection, respectively, you still have a chance to see the new take on the 2015 favorite separately. Mad Max: Fury Road Black & Chrome Edition will also be available separately on Blu-Ray for $29.98, in a two-film collection with the colorized theatrical version. It will also include a special introduction from Miller himself.

The B&W edition was promised back when Miller first started promotional rounds for the reboot sequel back in May 2015. Development remained slow, but Miller never strayed from his confidence. He continued assuring fans that they’ll see the colorless take —similar to what Frank Darabont did with The Mist several years back — in the near future. Now, those words are finally becoming actualized.

Additionally, the High-Octane Collection contains some other goodies for those Mad Max fans willing to fork up the cash. It also includes the featurette “Road War,” which finds Miller, Terry Hayes and Mel Gibson discussing the global success of Mad Max: The Road Warrior, the second film. There’s also Madness of Max, a feature-length previously-released documentary discussing the making of the original 1979 film.