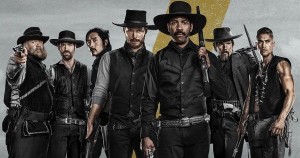 There is no stopping Chris Pratt. The actor’s latest film, The Magnificent Seven, is on course to earn $35.5 million in its opening weekend. Of course, we previously reported this number at $30 million, however, the positive word of mouth has changed that. The film raked in $12.7 million on Friday night, an impressive feat, no doubt. The movie also stars Denzel Washington, and marks third biggest opening weekend, behind 2007’s American Gangster, and 2012’s Safe House. Washington’s presence has no doubt increased the film’s success at the box office. This marks the second biggest opening for a Western film, with Cowboys & Aliens taking the top spot, but with reviews for The Magnificent Seven being significantly better than Cowboys & Aliens, would one expect a good run at the box office. The film currently sits at 64% on Rotten Tomatoes, and an A- on Cinemascore, in a summer of disappointments, it is nice to have a film that does not incredibly disappoint.

With no word on the international numbers, one should expect the Pratt/Washington film to dominate the box office for the coming weeks, as there is not any other blockbuster hitting the screens until November with Marvel’s Doctor Strange. Of course, while the numbers may seem low in terms of superhero filmmaking, it is also noted that the $35.5 million only counts the domestic gross, international numbers should be revealed later today.

The film will also go up against the newly released animated flick, Storks, which is set to make $21-22 million over the weekend. The animated film comes from Warner Brothers. who have not typically made animated features, however, following the release of 2014’s The LEGO Movie, the studio has upped their animating game.

So what do you guys think? Will you be heading to the cinemas to check out the Sony/MGM remake of The Magnificent Seven?