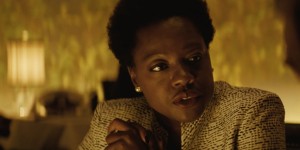 When you make a movie with The Joker, Harley Quinn and a bunch of other rough-and-tough, no-good baddies, things are going to get a little crazy. And, indeed, the set of Suicide Squad was appropriately bonkers. We’ve heard a couple stories already, but with the superhero blockbuster impending August 5 release, more details are coming to light — including the revelation that, apparently, Viola Davis was affected physically by all the insanity.

E! caught Davis during the 2016 Maui Film Festival, where she is receiving the Navigator Award, honoring how she “carved a path of distinction through the turbulent waters of the entertainment industry, without sacrificing their fundamental commitment to excellence.” But of course, the conversation soon switched to her massively anticipated summer release, and the How to Get Away With Murder star revealed a little more about what happened during production on David Ayer’s upcoming film.

It got so crazy that there were times during filming that I had heart palpitations. Not only heart palpitations, but at one point I said “Did I suffer from hearing loss? Why is my left ear still pounding.” Hey, that’s all I can tell you. Or else, I’d have to kill you.

You gotta commend Davis’ commitment to her craft. She kept up the good fight while having to act alongside Jared Leto’s method-acting looniness, and she commended Leto, Margot Robbie and the rest of the cast for getting “completely insane” with their newest film.

Meanwhile, Davis also revealed that, like the rest of her co-stars, she received a warped gift from Leto, with a present of bullets in a box awaiting her before filming. And she didn’t really meet Leto, the actor, until after the shoot, when they both attended the Galmour Awards, since she only was introduced to The Joker during their previous time together. She had the following to note about her time with Leto afterwards:

There was a part of me that wanted to say, “You know, I almost had my pepper spray out…. But he was completely committed, as all the characters are. Every last one of the actors.

Here’s the full conversation with Davis.