Disney has released a behind-the-scenes photo from The Mandalorian that shows Mark Hamill filming scenes with the Grogu animatronic.

The Mandalorian‘s second season ended with a huge bang when Mark Hamill’s Luke Skywalker and R2-D2 appeared to save the gang from Moff Gideon’s Dark Troopers. After slaughtering the troopers, Skywalker confirms that he’s there to take Grogu away so he can complete his training as a Jedi. It made for an emotional scene, not only because Grogu was saying farewell to Din Djarin, but also because Hamill had returned to the role. Hamill briefly appeared in The Rise of Skywalker, but the last time we saw him as a full-fledged Jedi in his prime was 1983’s Return of the Jedi.

While it’s been known for a while that another actor was used to film the action sequence for the finale, many were uncertain if Mark Hamill was actually there to film the emotional farewell between the baby and Djarin. A body double was used to film most of the scenes, with Hamill’s de-aged likeness placed onto the double’s face. Now, a new behind-the-scenes photo shows Hamill on set, confirming that he was directly involved with his scenes.

In an official video to highlight Disney Plus’ August slate, the streaming service teased a brief look at Disney Gallery’s episode focusing on The Mandalorian. The tease featured a brief look at Mark Hamill on set with Grogu. 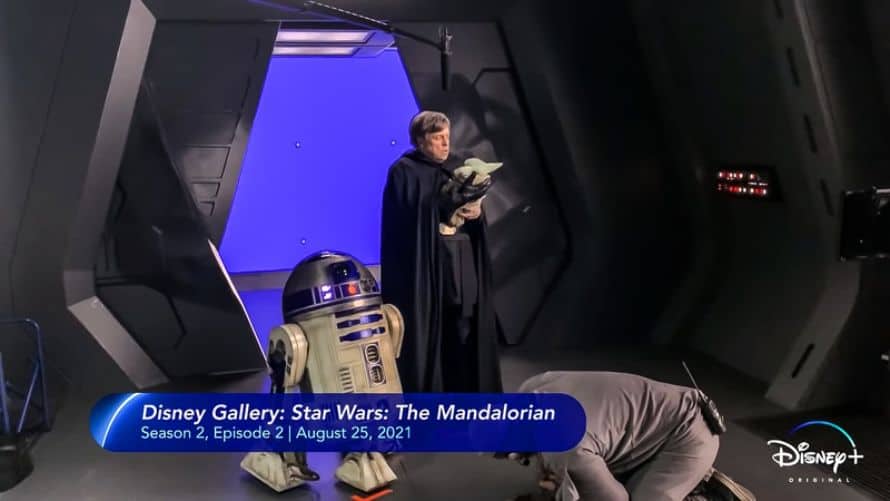 What are your thoughts on the behind-the-scenes photo? Comment below and let us know!

The Mandalorian is available to stream Disney Plus. Stay tuned for all the latest news on the future of the Star Wars franchise, and be sure to subscribe to Heroic Hollywood’s YouTube channel for more original video content.