Grab your umbrellas and kites, everyone, because Mary Poppins has returned.

Directed and co-choreographed by Rob Marshall, the filmmaker behind Chicago and Memoirs of a Geisha, Mary Poppins Returns picks up decades later as the classic nanny once again helps the Banks family. After the death of his wife, Michael Banks (Ben Whishaw)  –all grown up after the events of the first film — is struggling to stay afloat and the chaos is forcing his kids to grow up quicker than they should. An overworked banker who has long abandoned his dreams of being an artist, Michael has seemingly forgot what it means to feel Supercalifragilisticexpialidocious. Not even his sister Jane (Emily Mortimer), who’s followed in her mother’s political activist footsteps and become a labor organizer, is enough to right the ship, and so it falls to a mysterious nanny, one who seemingly returned to their household from out of the sky, to bring some harmony back to their lives.

Let me cut right to the chase though and gush about how lovely and fantastic Emily Blunt is in the titular role. From the first moment she floats on screen, Blunt is Mary Poppins. She’s posh, charming, and well-mannered, but at the same time she’s goofy, self-indulgent and a bit of a control freak. But, no matter what else Mary Poppins is, the best way to describe her is loving, and Blunt does a wonderful job bringing a warm, motherly presence to the protective role. Whether she’s gently interacting with one of the children or cracking salty jokes with her talking umbrella, Mary Poppins always appears confident and in control, and Blunt does a great job bringing that sense of power to the screen. The actress may be best-known for her action-packed role in Edge of Tomorrow, but she’s also an incredibly talented singer and dancer who shines in each of her musical numbers.

Mary Poppins may be the star of the film, but that doesn’t mean she is the only enjoyable character. Lin-Manuel Miranda joins as Jack, an upbeat man who works as a lamplighter around London. The best thing about Jack is that he has a prior relationship with Mary Poppins. He met her as a kid through his association with Dick Van Dyke’s Bert, but he never tries to upstage her. In the original, there are moments where Bert and Mary Poppins are seemingly coupled up, but here, Jack is just along for the ride and happy to enjoy some of the inexplicable magic once again. Miranda delivers in his biggest film role to date, but whereas Blunt truly embodies the role of Mary Poppins, there are parts in Mary Poppins Returns where it feels like you can catch him trying his best to act and not quite hitting his mark. The three Banks children are all entertaining, but it’s really Pixie Davies and Nathanael Saleh who shine the most in their roles as Anabel and John Banks. Dealing with difficult financial and emotional times has clearly impacted the siblings, and both Davies and Saleh do a great job of displaying the pained maturity they’ve had to adopt while also showing some of the awe and silliness that children should display around someone magical like Mary Poppins. Colin Firth also turns in a delightfully evil performance as a corrupt banker with his eye on repossessing the Banks home that works as the perfect one-dimensional foe in an uplifting kids movie like this. 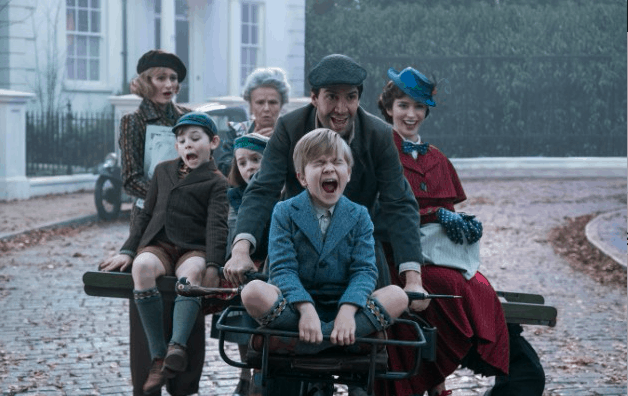 Now, I can’t really talk about a Mary Poppins movie without diving into the musical numbers. Don’t let Miranda’s presence fool you, he actually didn’t have anything to do with the songwriting process for the movie. Lyricists Marc Shaiman and Scott Wittman have produced songs that are just as delightful, catchy and uplifting as the originals. In a lot of ways, many of the musical pieces feel like direct sequels to the classic tracks, with one musical number also taking place in a bathroom and another heavily featuring a bunch of torch lighters (the stand-ins for chiminey sweeps this go around) out on the town. Everyone’s voice shines in the movie, especially Blunt’s, but each song is accompanied by wonderful choreography that helps each number feel lively and distinguished from the last.  And when the characters aren’t singing, the film’s score, beautifully composed by Shaiman, does a wonderful job engrossing the audience in the film’s quaint setting with its light jazz overtones.

Set in the 1930s, Mary Poppins Returns perfectly embodies London as it confronted the Great Slump before World War II. Every aspect of the set design, from the cobbled streets to the style of the classic British houses, screams authenticity and attention to detail. The prop and art department also do a wonderful job filling the background with beautiful items like fine china and old furniture pieces. London is more than just a setting in Mary Poppins Returns. It’s a vibrant place that noticeably changes throughout the film.

Just like in the original, there’s a sequence in Mary Poppins Returns where Mary takes everyone on a journey inside an animated world. The sequence is snappy and entertaining for many reasons, but what really stands out is how beautifully and seamlessly the stars interact with the animated world. There are instances where the Banks children shake hands with animated figures and at one point Georgie even trades hats with a cartoon dog in a moment that looks incredibly realistic and adds another layer of charm to the whole scene. In a world where flashy, 3D animation continues to dominate the market, it’s refreshing to see some classic 2D Disney animation used in such an effective, entertaining way.

While the film is clearly a sequel, in a lot of ways Mary Poppins Returns feels like an updated version of the original. Many of the new musical numbers had similar settings, lyrics and choreographed steps to their predecessors, but they all still come together as part of something wholly new and enjoyable. There are some movies that just feel untouchable, and a large swath of the movie-going audience likely considers Mary Poppins to be in that category. Despite how potentially unnecessary this sequel may be, Disney truly knocked it out of the park. Coming in at two hours and eleven minutes, the film could have been trimmed down a bit, but looking back it’s hard to say what should have been left on the cutting-room floor. Marshall crafted a loving, warm film that relies on nostalgia and a new sense of charm to connect with audiences.

It’s impossible to say which Mary Poppins film is better and that’s not really even an important question after watching this new adventure. Mary Poppins Returns is clearly more technically proficient than its 1964 predecessor, but the important thing is that everyone’s favorite nanny is back, and she’s as magical and compassionate as ever. Just like in her first outing, Mary Poppins is dedicated to reinserting joy and light into people’s lives when things get tough and dark, and those are valuable lessons for people of all age to internalize. Mary Poppins’ comments about adults’ tendency to forget about the joy and magic in their own lives serves as a fierce reminder to grab life by the horns and force yourself to feel something. Gather your loved ones and go see this over the holidays because it’s truly one of the most heartwarming movies I’ve seen in a long time.