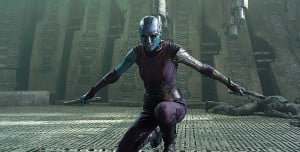 Recently the concept art for Guardians of the Galaxy Vol 2 was released for the public giving a “hero shot” for the whole team. 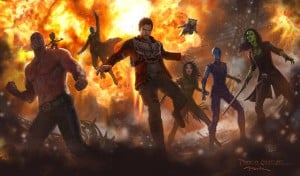 As you noticed, there are a few additions to the Guardians of the Galaxy. We get our first view of what fan-favorite Mantis as a member of the team. Notably also was that former adversaries are also a part of the team: Yondu and Nebula. Both had a contentious relationships with members of the Guardians were considered family. Yondo was a surrogate father/nemesis to Peter Quill/Star-Lord and Nebula was Gamora’s adoptive sister as they were both “daughters of Thanos.” With both on the team, it could be assumed that all is good with their family relationship. Perhaps, not so much.

While promoting Star Trek Beyond, actress Zoe Saldana who plays Gamora was asked about Nebula joining the Guardians and what to expect.

“You will begin to get a glimpse of how terrible life must have been […] to grow up with a crazy stepfather (Thanos) through Nebula. Nebula is still in that teen-y, f#cking hateful sh#t! She’s just resentful and bitter. Gamora, everything she does is trying to gain redemption for what she had done before. That is where you are going to find her and then, obviously, their relationship is very volatile”

“We’re starting somewhere very crazy but appropriate given where we had ended things off in the first installment. So Thanos is definitely spoken about – not highly,” s

So even though she is a new member of the team, for now, that may not last for the entire movie.

Guardians of the Galaxy Vol 2 will be released in theaters May 5, 2017.