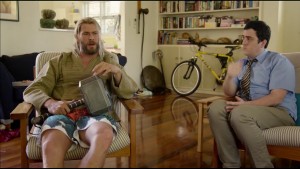 A few days ago, Marvel released a Thor: Ragnarok mockumentary that was played during San Diego Comic-Con. Now, a fan has started a petition to get the mockumentary that stars Thor (Chris Hemsworth) and his roommate, Darryl made into a Netflix show! The Change.org petition was created shortly after the mockumentary was released by Ty Schmidt of Wautoma, WI and already has over 500 signatures as of this publication.

The petition is a simple plea to turn the beloved mockumentary, which shows Thor’s life outside of the Avengers and what he was up to during Captain America: Civil War, into a Netflix show.

As soon as I finished watching the short on YouTube, it brought a huge smile to me. I laughed throughout the entirety of the video. Soon after, I went into the comment section, and stumbled upon a comment that said “Can we start a petition for this to be a Netflix Series”, and I thought to myself “I want this to be a thing too.” And here we are.
This show, if it were to actually happen, would be one of the funniest things I would have the pleasure of watching.
Please make this a reality, it would make many fans, including myself, very happy.

The petition was sent to Netflix and Marvel. While it is unlikely this show will be made, a very similar premise is slated to start on Netflix called Son of Zorn. Son of Zorn will premiere on September 11th.

What do you think? Does Thor have enough time to film a Netflix series? Will Darryl be able to tolerate him that long? Sound off below!