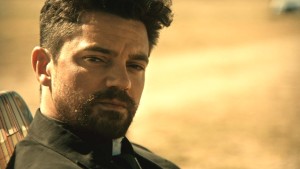 This Sunday, AMC’s Preacher ended its first season with a bang. Literally. The freshman series, adapted from Garth Ennis and Steve Dillon’s graphic novel of the same name and developed for TV by Sam Catlin, Seth Rogen and Evan Goldberg, became one of the wildest, weirdest and goofiest TV shows to ever hit televisions, and they’ve been rewarded for their insanity. In addition to getting a 13-episode second season, they’ve officially become the second highest new cable drama in 2016, behind FX’s equally captivating American Crime Story: The People vs OJ Simpson.

Charlie Collier, president of AMC, had the following to say about the exciting news.

When we announced plans for a TV adaptation of the iconic comic book Preacher, the most consistent reaction – often, even, from existing fans – was, ‘There’s no way to do that story on television.” Thanks to the vision, passion, smarts and guts of Seth Rogen, Evan Goldberg, Sam Catlin and the entire team on this show, we have just concluded a season of television that looks like nothing else I have ever seen on television.

He also went on to congratulate Preacher‘s stars, namely the leads Dominic Cooper, Ruth Negga and Joseph Gilgun, “who are now leading a road trip unlike any other.” He also thanked a few other key players, including Sony Pictures Television and Tom Cruise. The latter makes sense if you’ve seen the pilot. Finally, Collier wanted to, once again, applaud the three developers, whom lead this batshit crazy ride into existence and were “so damned crazy in the first place.”

Collier also noted “it is the time of the Preacher, and the story really has just begun.”

There’s no word yet on when Preacher season two is supposed to air, although we know that the villainous Herr Starr will play a factor. In any case, we’ll be watching it when it comes. Preacher is one of the most ambitious, exhilarating and surprising shows on television, and we can only hope that continues next year.

In the meantime, if you’re not caught up on Preacher, all 10 episodes are now available on AMC.com — at least for the time being.