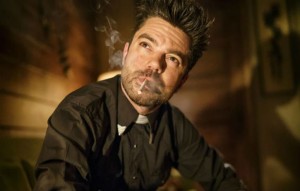 With each passing episode, AMC’s Preacher takes it down a few octaves. That’s not a bad thing; unless you absolutely, positively need a sugar rush, that is. The Sam Catlin, Seth Rogen and Evan Goldberg-developed series is smartly taking its sweet time, letting you know what it’s packing upfront but proving itself more reserved than it initially seemed, and that might understandably frustrate some viewers. Those expecting every episode to pack the same whiz-bang-buck found by the handfuls in its rambunctious pilot will likely find themselves bored or frustrated by this week’s “The Possibilities,” but that’s okay. Preacher isn’t playing it safe, but it’s not playing it careless either. It’ll keep giving the goods in due time, one should believe, but in order to appreciate them, Catlin and his team know they have to have a little build-up, warm people up. Tonight’s episode is build-up, and that’s perfectly fine.

“The Possibilites” focuses mainly on our titular main-of-the-cloth, Jesse Cutter (Dominic Cooper), coming to terms with his newfound powers. He doesn’t understand them. He certainly doesn’t quite know how to use them. But he knows something’s up, and that he has a gift well beyond his comprehension. Is it from the Lord? Is it from someone below? He doesn’t know, even if we (kinda) do. Meanwhile, Tulip (Ruth Negga) is still trying to get the Preacher back on her team, and we discover a little more about their troubled past. Although we only get a couple brief glimpses, we know that something went down, a man was killed and that somebody on their team decides to hightail it out before things got messy. Of course, we’ll probably know more in the episodes, or maybe even seasons, to come. But for now, teasing is the name of the game.

We also get to spend a little more time with Cassidy (Joseph Gilgun), but primarily in the company of others. We get to see him spend some time with Jesse, we see him moping around the church avoiding the daylight with Jesse’s sister, Emily (Lucy Griffiths) and we see him wadding off two mysterious men-in-suits, Fiore (Tom Brooke) and DeBlanc (Anatol Yusef), who have a knack for staying undead. You know, just like himself, but in a different way. As we learn this week, they report to the man upstairs, and they’ve come for Jesse to prevent him from doing harm. But they’ll need to get through Cassidy for that to work, and he isn’t known to relent. Of course, once they find themselves buddying up with the often-personable vampire, he agrees to talk with his newfound BFF to work out some sort of agreement. Whether or not that worked out won’t be determined until later, though. Again, build-up.

We also get to see a little bit more with Donnie (Derek Wilson), who is none too pleased with Jesse after their bar brawl ended up making him the laughing stock of the town, and our presumed villain Odin Quincannon (Jackie Earle Haley), who apparently has a thing for watching hardcore snuff films at any hours of the day, with this staff forcing themselves not to address his viewing habits. It’s not a lot to talk about — or, more appropriately, write about – but it’s enough to savor our interest. Preacher might have 10 episodes, but it’s keeping itself at a respectfully lucid pace. It ramps up the tension, or decidedly dials things back, as it damn well pleases. There’s no need for arm-twisting altercations or bloody church fights every week. But when they come, man, do they deliver the good stuff. Like an experienced-beyond-her-years lover, Preacher likes to keep things simple and flexible. There’s no need to have things get heated every week, and that only makes it more desirable as a result. It’s smart television, especially by AMC’s comic book adaptation-standards. And it’s very, very respectable too.

This third episode, the first to not directed by Rogen and Goldberg or written by Catlin, is not going to be remembered as the best episode of the season or series. And it shouldn’t be. It’s not a filler episode; it’s a progression episode. It’s that extra couple miles you have to hit to make it to your destination. It might not provide a lot of excitement, but it does give you some stuff to admire. It’s not sexy or stylish as the last two, but it’s commendable all the way. It’s hard not to want something a little more, but you can’t complain with what you got here. It’s keeping things direct and tactile, and it clearly has a bigger plan in mind — much like Tulip herself. It’s not the best lecture this Preacher has ever given, but it resonates all the same. It’s a comfortably numb episode, but it’s good for what it needs to be. And that’s all it wants to be, and all it really needs to be, this week.

Additionally, after witnessing Negga and Cooper struggle their way through Warcraft, it’s nice to see them in something, you know, good again (sorry not sorry, Warcraft fans).