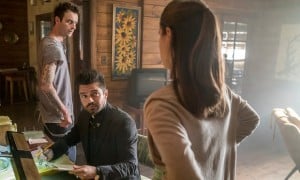 After last week’s action-packed episode, things were expected to dial down with its follow-up, “He Gone.” And, indeed, we might have our slowest, most meditative episode to date so far in this seventh episode. In a series that has walked a fine line between taking its time and dragging its feet since its pilot, Preacher has had its fair share of bumpy moments, but it’s never quite gotten bad. This week’s episode, while likely the weakest, is not a bad episode, but it doesn’t quite channel the spirit of the other, better episodes we’ve seen thus far. This week’s sermon brings more than its fair share of exceptional moments, but at the same time, it does shake your faith in the AMC series at least a little bit at times.

“With God, all things are possible.” These are the words that welcome us back into the world of Preacher this week, and they do not lie. Anything is possible in this world of spiritual debauchery, and that includes poor old Eugene/Arseface (Ian Colletti) indirectly getting sent straight to hell under Jesse Cutter’s (Dominic Cooper) Genesis orders. The mass goes on as expected, and nobody saw anything out of the ordinary, expect for one key person: Cassidy (Joseph Gilgun). He saw the whole incident with his two undead eyes, and he confronts the preacher about it in his usual roundabout way. Cassidy strongly suggests Jesse does something about this, but the preacher doesn’t budge. He keeps to doing the Lord’s work, and God never sleeps much anyway. And it doesn’t help that Cassidy still hasn’t gotten around to confessing his true self to Jesse, in fear of what he’ll do when he finds out.

Meanwhile, Tulip (Ruth Negga) is starting to settle more in this quint Texas town, even to the point where she’s cooking for others. Not cooking particularly well, mind you, but cooking all the same. And as we see in a series of flashback sequences, Tulip and Jesse have an extended history with one another, ever since their troubled childhood. Tulip grew up with her mother in jail and with a deadbeat drunk as her uncle. Without any authority figures, she lashes out onto others and attacks bullies during recess. She even bites a kid’s nipple off in the process!

Along the way, Jesse is there to help in any way he can, including inviting her into their home. Some romantic tension continues to flourish between them — namely from one (intentionally) very suggestive fight sequence in the midway point — but it’s still a strict friendship at this point. They have a more brother-sister relationship as kids, although that’ll certainly change when they get into adulthood. How and when that change will happen remains unseen, for the most part. She calls him “boyfriend” without any qualms behind his back, and that’s upset her newest lover, Cassidy, a little bit.

After an incident leaves Tulip and Jesse separated, Jesse detests his saintly father and wishes death upon him. Of course, you must always be careful what you wish for, because you just might get it. Between moments like these and ones shared between Odin Quincannon (Jackie Earle Haley), back after an episode absence last week, we really get into Jesse’s mindset and explore his fragile psyche. These are expectedly the most interesting scenes found this week, and they’re often sacrificed or interrupted by weird plotting and awkward switches back-and-forth in time. As such, this episode provides a number of solid moments, but it’s hardly one of the best we’ve seen. Hopefully next week brings the real hell and high fire. It certainly looks like it will.