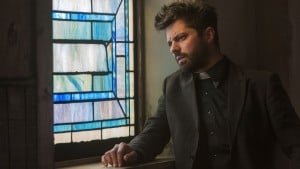 Things have been contentious for some time between Odin Quincannon (Jackie Earle Haley) and our titular preacher, Jesse Cutter (Dominic Cooper). Their feud began back when Jesse was merely a child, and Qdin eventually lead to the death of Jesse’s dad, John Custer (Nathan Darrow), the original father. But as we learn this week, Odin has been at war with God ever since the ’80s, when a freak mountain cable accident from Odin’s entire family killed. To make matters worse, he had the parts sent to him in a box, next to cow parts. John tries to comfort him, but he’s no helping him. Even God can’t quite save Odin, and he’s a devil of his own at this rate. And like the devil, Odin is trying to take down the holy land, i.e. the Cutter church, in order to turn it into a food court. Granted, Odin didn’t know what a food court was until he was told by one of his many loyal Meat & Power employees, but that’s not stopping anyone.

Odin and his men are bringing quite a fight to Jesse, and they’ve come locked and loaded. The only problem, however, is that they completely undermined Jesse’s power. That turns south of them when Jesse somehow winds up with all their assault rifles and uses the guns against them. They keep attacking and attacking, and it’s no use. People get hurt, several get injured and even Clive (Alex Knight) finds himself in a state of shock when Jesse shoots the brothel house regular’s penis straight off. Talk about a cruel twist a fate. God has no patience of sinners, unless they have a special power He needs.

Jesse still wields the power of Genesis, and that lead to him unintentionally banishing Eugene (Ian Colletti) straight to Hell two episodes back. Since then, Jesse has worked his damnedest (you see what I did there?) in order to bring Arseface back to Earth, but to no avail. Or, at least, it seems like Jesse was successful, but it was only a figment of his imagination. That doesn’t stop that said imaginary Eugene from talking, and talking, and talking with Jesse, all about his various problems, insecurities and contemplations. But he knows that won’t help much, and if he really wants to get Eugene out of Hell, he’ll need the help of some reliably unreliable angels, Fiore (Tom Brooke) and DeBlanc (Anatol Yusef). And they’ll only do it if they get back Genesis, which Jesse reluctantly agrees to.

They remove the spirit successfully, but Fiore and DeBlanc don’t hold up their end of the bargain. It’s no matter, however, as the spirit gets out of the coffee can and sucked back into the preacher. At that point, the angels have given up on Jesse. There’s no saving him now. And as this goes down, Hugo Root (W. Earl Brown) tries to get back in the church after he gets a call from Jesse saying he found Eugene, but he must find some settlement between these attacking foes. One of those attacking foes, though, is Donnie (Derek Wilson), who stupidly shoots off his eardrum just so he can’t hear Jesse’s almighty voice. What an idiot. Also, Tulip (Ruth Negga) gets a dog, but a lot of viewers aren’t going to be happy with what happens to it.

Preacher keeps you on your toes and always questioning the next move. Would you want it any other way, though? The masses should keep coming. The show is really finding its rhythm, and while it’s not quite heavenly yet, it’ll turn you into a true believer.

Here’s the top five moments of the week.