Now that we’re officially halfway through Preacher‘s first season, things are only getting wilder. The freshmen AMC series — now officially coming back for a second round — is slowing revealing the details one-by-one, and in the process, it’s letting the blood splatter and the fury rise. Preacher has moved at a more tempered pace ever since its premiere, but when it comes time to deliver the goods, it knows how to give them plentifully. That can be seen in this week’s installment, “Sundowner.”

For the first time in Preacher‘s early run, we don’t have our cold opening in some far away time or some far away land. Instead, everything is set squarely in our present-day Texas town. No trips to Africa. No trips to space. No time spent in the Old West. Instead, showrunner Sam Catlin finds us exactly where we left things off, and it doesn’t waste a minute in the process. Our titular preacher, Jesse Cutter (Dominic Cooper), is still in the diner, talking it up with our two men from Heaven, Fiore (Tom Brooke) and DeBlanc (Anatol Yusef), as they explain themselves a little bit. Though their hesitant to give away specifics, an atypically persuasive Jesse gets them to slip a few details.

As it turns out, the spirit inside the preacher is not from God, nor is it from the Devil. It’s from something in-between, an unholy creation made behind both parties’ backs, known as Genesis, and neither side are particularly happy to have it around. DeBlanc and Fiore know that what comes from this crossover can not lead to any good, and they’re going to stop it before it gets any worse. They try to get Preacher to turn his otherworldly powers over to them in their trusted coffee cup, but he declines. Before they can continue persuading Jesse, they get themselves in a bit of a ruffle.

Apparently, another messenger — this time looking for Fiore, DeBlanc and Jesse — is on their case, and she has the power of rejuvenation as well. What exactly is rejuvenation? It’s hard to say for sure. It’s something that happens, more or less. They’re killed and then they’re brought back to life. Simple as that. They don’t feel anything when they get the axe, and they don’t really feel anything when they come back. It’s just a continuous loop they’ve grown accustomed to. And boy, do they use that to their advantage. The next few minutes are devoted to a bloody fistfight where almost everyone is dying and coming back to life again over and over again, living quite a mess in the process. It’s not long before Cassidy (Joseph Gilgun) also finds himself in the mix, getting the upper hand but still getting beaten around. Good thing he has all that extra blood lying around. It’s a glorious display that we only get to see in moderation. We’re not 100 percent sure how it ends; we just know our main guys win.

Cleaning up the next morning, Fiore and DeBlanc once again insist they take the spirit from Jesse. Although he mulls it over for a little bit, he ultimately declines. He knows that he can do good with this vessel, and he doesn’t want to give it away even if it wasn’t a gift sent by the Lord. God might not have given it to him, but Jesse’s going to do His work with it anyway. Cassidy is understandably nervous, knowing from his 900 years that it’s not always best to mess with the man upstairs, but Jesse doesn’t listen. He has a service to perform this Sunday, and he needs to add some extra seats and a handy speaker system for the extra arrivals in town. Jesse’s sister, Emily (Lucy Griffiths), couldn’t be more pleased.

Speaking of Emily, she gets another visit from our trusted badass gal, Tulip (Ruth Negga), requesting that she stay away from her “boyfriend.” She throws her daughter’s “art thing” at the wall in a moment of anger and storms out, but not before Emily can throw a few word back to her. She tells Tulip about what she did and, filled with some unusual guilt, Tulip decides to fix the “art thing” for Emily’s daughter. In that time, they get more acquainted, making pamphlets and doing some more to prepare for the service coming soon. Emily can hardly believe what good Jesse is doing with the church, and neither can Tulip. It’s in that moment, then, that Tulip takes the opportunity to send the pamphlets, wine and other accessories to the church, using these errands to pay a visit to her boyfriend-in-question.  And that’s when she realizes that her other man (a.k.a. vampire) Cassidy calls the church his home, prompting some unexpected awkwardness. Nevertheless, Tulip is a master at staying cool during moments of unease.

Meanwhile, Eugene/Arseface (Ian Colletti) finds himself welcomed by some of his peers, inviting him to play with some firecrackers in the middle of the tunnel. He enjoys the newfound company, but he’s afraid such an invitation comes unearned. He gets another moment with Preacher to discuss this, but it appears that the vessel inside Jesse is starting to go south. He yells at Arseface, asking him if what he does for him isn’t enough when Eugene asks him to take back whatever he did to the lady he hurt. Eugene, however, doesn’t repent. He stays true to his convictions, and that leads him to a very bad place. Literally. We’ll see next week how far things will go when the Devil starts to take over our Preacher. 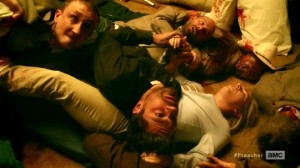 How can I talk about this week’s most awesome moments and not discuss this awesome little fight? It’s positively the best thing about this week’s altogether strong episode, and its only sins are that it comes too early and that it ends too quickly. It’s a fight shot with style, precision and a fun sense of loose-but-established rules from director Guillermo Navarro, Guillermo Del Toro’s longtime cinematographer. Comparisons to the infamous single-shot fight in Daredevil‘s first season will not be especially unearned. Even though the rejuvenation aspect invites low risks, the showrunners take that opportunity to make it all about the fun, resulting in one of our bloodiest fights to date on Preacher that’s also a damn good bloody time. It’s a shame it had to check out so early. 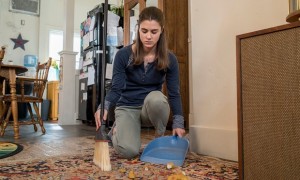 With its most self-contained episode to date, Preacher allowed itself the chance to focus more on its central players. As such, it gave more time for the often-unappreciated Lucy Griffiths, who works well with the often hard-to-beat Ruth Negga, while still providing enough personality to stand out on her own. She doesn’t really get any big speeches or flashy scenes, but that doesn’t matter. She needed to establish herself and make her more than Jesse’s nagging sister, and she did that and then some this week. I hope we get to see her more in the episodes to come in this light. Although we only have four more this year, there’s plenty of room to get this often-sidelined character in the central action again. 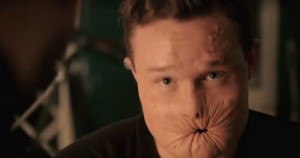 I’ve talked about Ian Colletti’s exceptional acting before, but he deserves more praise — especially after this week. The young actor, forced to play a character with a bit of a mush-mouth and one that relies mainly on the eyes to communicate his pain, happiness and deep-seated sorrow, always has the most obstacles to overcome, but it never feels like a challenge under Colletti. He gives the character his all, but more importantly, he makes it feel genuinely sweet and nuanced. His Arseface is filled with great depths of pain and self-reflection, but he’s also the most selfless character on the show. He is Preacher‘s beating heart, and when push comes to shove this week, he’s the one that continues to stand his ground. I truly hope to see more of him in the future. I definitely don’t want this to be the end! Again, poor Arseface. 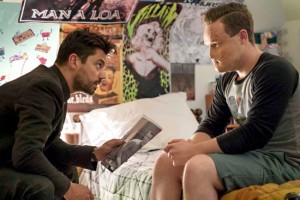 Speaking of which, the confrontation shared between Jesse and Eugene this week was equal parts tragic and absorbing. With our man of God trapped in sin, it’s ultimately Eugene, a man buried in sin, who has to step up and be the man of moral and reason, which Jesse doesn’t take too well. It’s like something out of a Shakespeare scene at times, but these actors really sell it — especially when you consider the fact that the one has a bunch of make-up covering his mouth. This scene is leading to some big consequences, and I’ll be very excited to see where they’re taken. 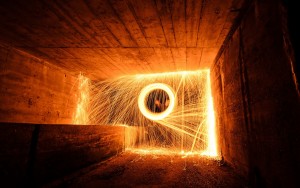 You know what? Since it’s the 4th of July, and these particular fireworks were so beautifully realized, why don’t we give them a shout-out too? It only feels right. I know these ones weren’t the ones in the episode, but it’s the thought that counts.

On that note, have a nice (and safe) 4th of July readers! I hope you enjoy your Independence Day accordingly.