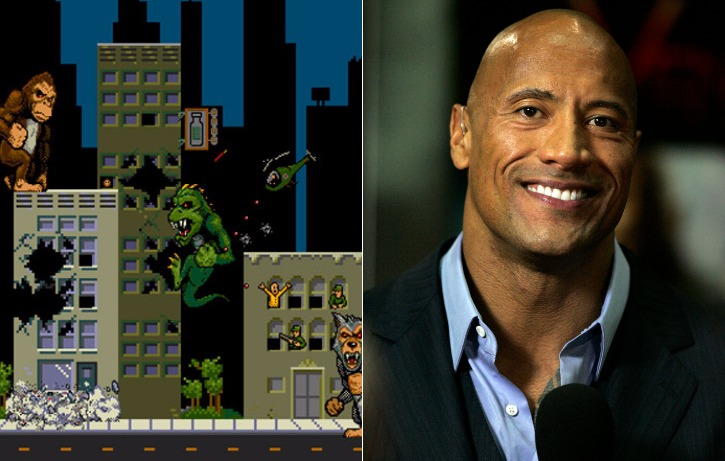 It is no secret that Dwayne “The Rock” Johnson is the busiest man in Hollywood. It seems like at least once a month, news is released about an upcoming project he has his named attached to. He has The Fate of the Furious, Baywatch and Jumanji coming out this year and he will also portray the villainous Black Adam for the DC Extended Universe. But even with those titles, one of his most intriguing projects is Rampage.

This film is based on the video game of the same name, and will be directed by Johnson’s San Andreas director Brad Peyton. The film has added an impressive slate of actors and actresses including Academy Award-nominee Naomie Harris (Moonlight), Jake Lacy (HBO’s Girls) and Breanne Hill. Joe Manganiello and Marley Shelton are also reportedly in talks to join the ensemble.

Yesterday, Johnson shared a photo on his official Instagram page which depicts him along with his writers, producers and director in a script session about the upcoming film. Johnson confirms that Rampage will indeed be the next film he makes. You can see the photo down below.

Spent my Friday night at our Warner Bros offices in a 6hr script session with these rampaging rockstars. Our RAMPAGE (next movie I’ll make) writers, producers, director and star (occasionally me). Even though this took us deep into Friday night and we all have families and stuff to do – this kind of meeting is so critical to our movie’s success. Everyone’s instincts were firing on the highest of levels. My fav moment from this merciless 6hr meeting was when I shared with this group that there’s an equity and trust I’ve built with my audience that they trust me to take them on an epic ride, and always do our best to send them home happy. A very cool moment to see everyone’s eyes light and heads start to nod. To win on any level you gotta have teamwork and collaboration and cant thank everyone enough in this room for their energy and focus. You truly helped us move the needle. And Wendy Jane you’re Superwoman for your creative brilliance and putting up with all these asshole’s dumb guy jokes. Not me of course, I’m a gentleman. ? Next stop for me in my research – the Primate division at the Atlanta Zoo (my character’s a Primatologist & head of an anti poaching unit in Rwanda). Really informative and educational character to play and project to work on. More to come. Start shooting this APRIL. #RAMPAGE

Johnson will portray a Primatologist that’s a head of an anti-poaching unit in Rwanda. Perhaps this film may actually have a message about the treatment of animals.

What do you guys think of this news regarding Rampage? Are you excited to see The Rock in yet another exciting action film? Which of his upcoming projects are you most excited to see? Sound off in the comments below, and continue to follow Heroic Hollywood for your latest news and updates about Rampage as well as The Rock’s upcoming new movies.