Since the release of Avengers: Infinity War earlier this spring, fans have no doubt been rattled by the many on-screen deaths of characters who will no doubt be resurrected or brought back in some way in the fourth Avengers film next year. That hasn’t stopped many in fandom or even on the creative side of things from sharing or posting images, memes, or reminders of what Thanos did, such as the Thanos subreddit, for example, banning half its members. But let’s talk about Mr. Robert Downey Jr. for a moment here.

The man who kicked off the Marvel Cinematic Universe in 2008 is no stranger to memes of the MCU films, not the least of which includes Avengers: Infinity War. Last Wednesday, on his Facebook, Robert Downey Jr. shared an image that combined Tony and Loki’s conversation in The Avengers about the team having a Hulk, as well as Thanos sharing that he’s got a jar of Avengers, going off of the scene in Pirates of the Caribbean: Dead Man’s Chest.

Accompanying this was the caption “I always love a joke that requires three different movies to understand it.”And in fact, with many of the Avengers dusted, Thanos would want to keep the remains altogether, so why not in a jar? Here, have a look at Robert Downey Jr’s Infinity War-based Facebook post below: 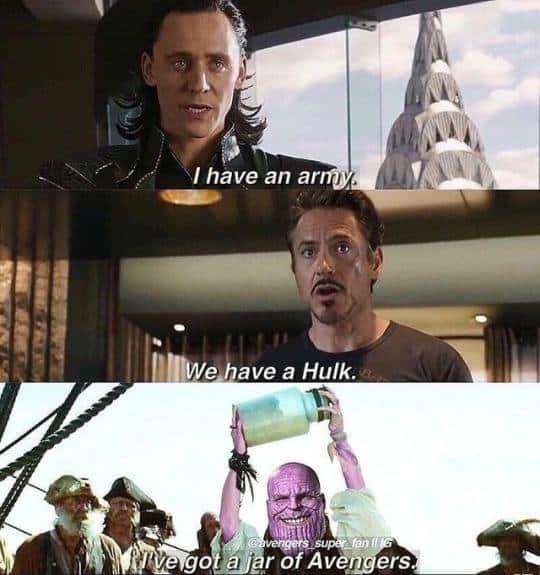 Of course, it helps that Tony Stark was one of the survivors of the Thanos snap in the climax of Avengers: Infinity War, so naturally Tony would have a moment to post about what went down in the battle against Thanos. Whether Thanos ends up presenting the jar of Avengers in the fourth film remains to be seen, but he can do practically anything with the Infinity Gauntlet, so don’t rule it out.

Had you already seen this meme before? Or was it your first time spotting it through Robert Downey Jr. sharing it? And what hopes and expectations do you have for Iron Man’s character in the next Avengers film? Let us know in the comments below.