Shazam! director David F. Sandberg has responded to a fan’s complaint regarding the humor presented in trailers for the DC film.

The first trailer for David F. Sandberg’s Shazam! indicated that the upcoming film will offer a more lighthearted and humorous adventure than recently released DCEU movies, which some feel is the wrong direction for the franchise. In response to a humorous video Sandberg shared on Instagram, one fan took his grievances to the filmmaker and explained why believes bringing Marvel type humor to DCEU films is a mistake. Sandberg responded with a simple post that read: “Why So Serious? The trailer represents the humor in the film well. If that doesn’t appeal to you, don’t see the film.” 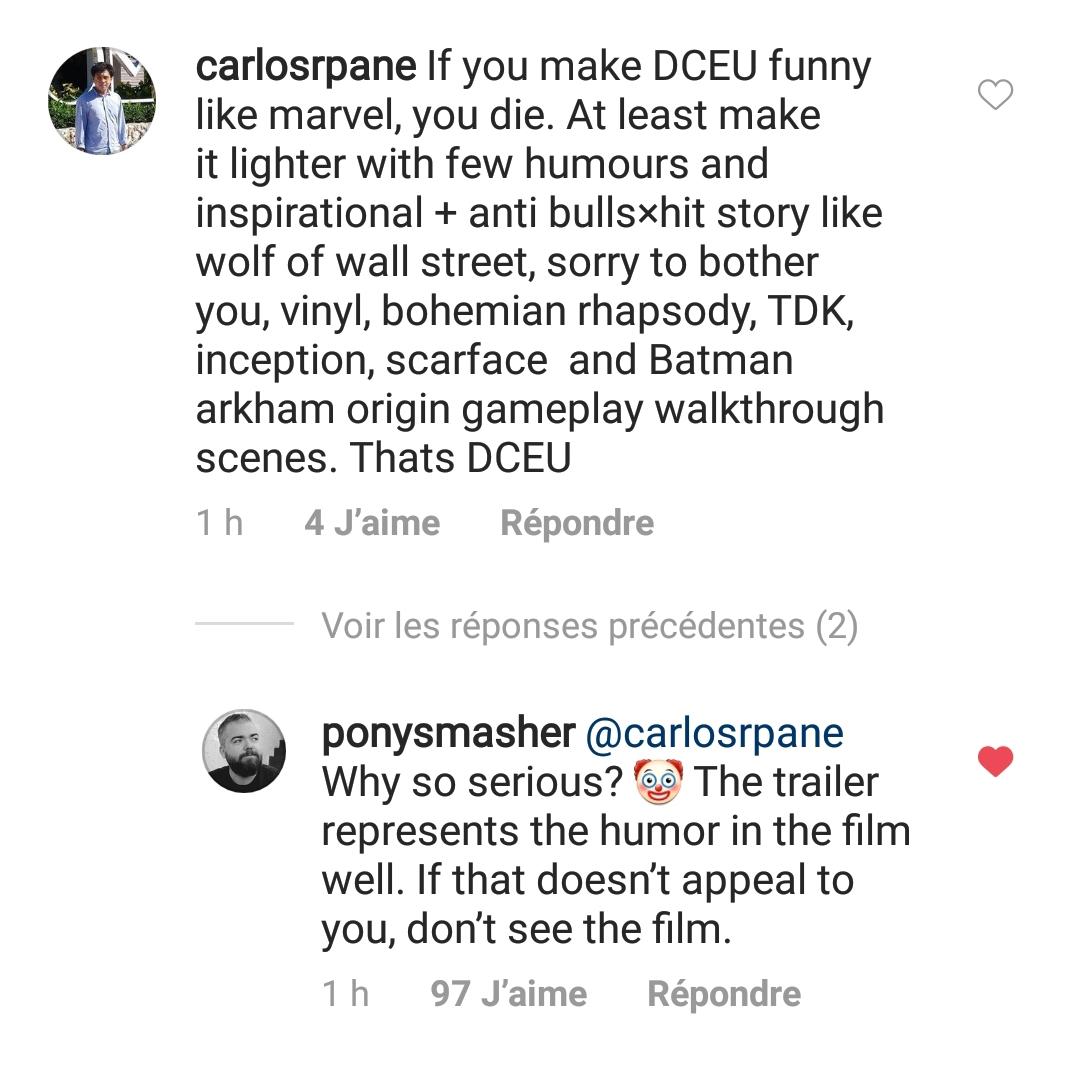 What are your thoughts on the humor in Shazam? Personally, whatever helps bring the DCEU out of its generally dreary tone and aesthetic works for me.

Well, cowboys and cowgirls, Red Dead Redemption 2 is finally here. Eight years after the original title took the gaming world by storm, Rockstar is back with a prequel set ten years before the original. For people who like horses but may not want to ride them in real life, they’re in luck, because anyone who plays Red Dead Redemption 2 will be sitting on a horse for quite a while. As you pursue an outlaw life, jumping from town-to-town, players explore a world full of danger and excitement behind every corner.

Red Dead Redemption 2 has already broken pretty much every entertainment record imaginable. It’s had the most successful opening weekend for any entertainment product ever, so you don’t need to take my word on why this game is so good, just go look at the numbers. Underneath the massive, 60-hour story, is a beautiful world layered with complicated characters, powerful predators and painful memories. So, what are you waiting for, go jump on your horse and start playing this game!

Discover the nine best things about Red Dead Redemption 2 below!

Sure the game is beautiful and it’s fun to duel other outlaws, but what first pulls people into Red Dead Redemption 2 is the sharp writing and dialogue. Every character, from the protagonist Arthur Morgan or his colleagues in Dutch’s gang to the random interactive individuals the player bumps into, has sharp, unique dialogue. Despite the similarities between many characters, they all have something interesting to say and add to the world. More than just time-filler, the background conversations in this game often fill people in on the details of the world and give hints about other people’s backgrounds. Sitting down at a local saloon to play poker is more than just an entertaining way to lose some money, it’s also a way to collect information. Red Dead Redemption 2 takes place in a rough setting, so it’s fascinating to learn what people are thinking and stressing about at that time through their dialogue.

Instead of being restricted to one town, Red Dead Redemption 2 is an open world game in every way imaginable. Once the game loads up, there is no loading as the character traverses the massive map. Instead, the game seamlessly transitions from one area to the next as Arthur rides around on his horse. Then, once you finally settle on a town or a camp you like, the people are already walking around and talking, waiting for some interaction. Once this game boots up there is nothing that takes you out of the moment, giving the game a very fluid, life-like quality.

7. John Marston and the Gang

Red Dead Redemption became an immediate classic for many reasons. An incredible plot and slick game-play certainly helped, but part of why audiences truly connected with the classic game was the protagonist: John Marston. A former outlaw who has since found a new path, Marston is an ethical individual trying his best to survive as the west slowly transforms into an industrially controlled zone. Over the course of the first game, players truly grow alongside Marston and watch as he interacts with people from his past and hatches a plot to keep his family safe.

Red Dead Redemption 2 may be a prequel that sees players control a different character, Arthur Morgan, but that doesn’t mean Rockstar forgot about their original sweetheart. Marston is back, and this time he’s much younger, meaner and stupider as he’s still a young man trying to make his mark on the world. His family and many of the shady character’s he crosses in Red Dead Redemption are here too, giving audiences even more information about Marston and the way he likes to live his life. At the moment, Red Dead Redemption 2 seems to be setting Morgan and Marston up for some kind of confrontation, but I’m just happy to see the classic cowboy back after all these years.

Red Dead Redemption 2 is more than just an intense single-player game, it’s also an RPG that makes players take care of themselves. It’s not enough simply to heal yourself, to stay at top performance, players have to make sure Arthur is constantly nourished and well-rested. Over fatigue is a big deal in this game, and if you find yourself too far away from your horse you may have to start foraging for food in order to make the long trek back.

Not only do players have to keep Arthur alive, but they also have to take care of their horse. It may sound tedious, but ensuring that the players horses are at top strength is an essential component of the game. No one in the west just jumped on a random horse and immediately bonded with them, it takes time to cultivate that relationship, and Red Dead Redemption 2 allows this simple, realistic side of the cowboy lifestyle to shine through.

There are a lot of ways to entertain yourself in Red Dead Redemption 2′s massive world, but one of the most interesting things to do is go hunting. Whether your skinning animals to make money in town or finding something to eat for dinner, the game takes the act of hunting very seriously. Everything from foxes to grizzly bears are roaming this big world, and players need to stay alert as to where they are on the map or they may just cross a hungry predator. There are multiple levels to hunting in this game, including tracking and laying out bait, making it a long-process where players need to patiently stalk their prey instead of simply pointing their gun and shooting into the forest

4. Choose for Yourself: The Rockstar Formula

Like most games with a major story running through it, a lot of the character’s actions are predetermined. But, as with any Rockstar game, players can choose to cause a ruckus or follow society’s laws. One of the most enjoyable aspects of Grand Theft Auto is just letting loose and causing some trouble, and while the carnage isn’t nearly as destructive in Red Dead Redemption 2, running from the law is just as fun. Having a large bounty on your head may make things inconvenient in major cities, but it’s easy enough to pay it off at a local train station. What makes playing an outlaw so entertaining is that they get to be a hero on one day and a scoundrel on the next without feeling like they are abandoning their personalities.

No game is complete without a beautiful soundscape, and Red Dead Redemption 2 has just that. Not only does it have a sprawling soundtrack that includes everyone from Willie Nelson to D’Angelo, but the score, recorded with over 100 artists, is wonderful. Woody Jackson, the composer on the original game, returned to score this new one and his pieces are as effective as ever. Whether you’re just riding around the country or engaged in a vicious shootout, the music is right there accompanying you, dragging out the intensity or serenity of each moment.

As entertaining as Red Dead Redemption 2’s core story is- and this is speaking as someone who still hasn’t defeated the massive game- it’s really the side-missions and random interactions that make the game so enjoyable. Immersion is a word game critics and developers throw around a lot, but it is a central component of Red Dead Redemption 2. Whether you’re just walking around the town or riding your horse through the desert, odds are someone is going to talk to you and introduce you to another part of this massive world. Everyone here has a story and something worth saying, making the amount of content shoved in the game seem almost daunting. Sometimes it’s hard to choose which mission to continue because some of the side quests are equally or more compelling than the core story line. The game has 60 hours of story and over 500,000 lines of recorded dialogue, and this doesn’t even include the upcoming online mode that will keep players engaged long-after they’ve defeated the solo mode.

1. Getting Back on the Saddle

There have been some big releases for game franchises over the last few months with both Call of Duty and Assassins Creed introducing new titles. What makes Red Dead Redemption 2 so special is that this is the first time gamers have stepped back into this world. Sure, there was the Undead Zombie expansion for the original game, something that added hours worth of content to the game, but this is a brand new experience that seemingly elevates everything that made the first one so special.

Players may control Arthur Morgan this time around, but that doesn’t change much about the interactivity with this world. With the inclusion of cinematic mode, it’s easy to truly get lost in Red Dead Redemption 2 as Arthur gallops across the plains. Whether you’re taking in the sites, playing some poker in the local saloon or looking for trouble on the road, it’s just so damn fun getting back into the cowboy mindset.