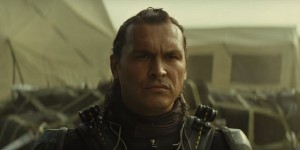 Oh Slipknot, we hardly knew thee. Much ado has been made about Adam Beach’s limited character in David Ayer’s Suicide Squad since the film’s release, but with so little time spent with the character on-screen, many have wondered what was planned for the character before his role got significantly edited down. When speaking with the fine folks over at The Empire Film Podcast, however, Ayer shed some light on Slipknot’s origin story. Naturally, expect Suicide Squad spoilers from this point forward.

Slipknot is one of the few characters in the film without a proper introduction. According to Ayer, that wasn’t always the case. He apparently shot some additional material with the character, which included an introduction sequence, but that ultimately got left on the cutting room floor in favor of economical storytelling. Listen to the podcast, or read the transcript of his exact thoughts.

Yeah we shot one, but after a point it became overloaded, ya know, so you have to cull and pick and choose your battles, and Slipknot gets his head blown off pretty quick, so ya know, I made a commitment early on not to try and create some kind of misdirect because when you have that many characters every frame of real estate is priceless, and I didn’t want to invest in that real estate to create some misdirect because after opening night everyone knows he dies anyway.

You can listen to the entire podcast interview below.