RUMOR: This Is How Spidey’s Suit Looks In ‘Spider-Man: Far From Home’

Alright, strap in, put on your speculation hats, and get ready to verify your most well-informed sources because we’re entering into rumor territory. This time, it’s about everybody’s favorite wall crawler. No, not Venom. He’s out in theaters this week. No, we’re talking about Spider-Man, as the follow-up to Homecoming, Far From Home, is currently filming now. And this time, it’s about Spider-Man’s costume.

The webhead has had a number of suits in the Marvel Cinematic Universe so far. Literally a few. There’s the homemade one that we first saw him wear in the footage during Captain America: Civil War, which he then wore again during his final battle with the Vulture in Homecoming– not helped by the fact that Tony, you know, took the suit back. And then there’s the suit that Stark prepared for him to wear during the airport battle in Civil War that Peter wore for the majority of Homecoming.

This isn’t even getting into the Iron Spider suit worn during Avengers: Infinity War. And while Spider-Man didn’t feel so good in that film, pretty much everyone, including J. Jonah Jameson, knows he’ll eventually pull through. And indeed, he’ll be back in Far From Home, which comes out after Avengers 4. The question is how will he look? Set photos have given us glimpses of the cast and, more recently, a stunt double as Mysterio, but we don’t know for sure how Spider-Man’s suit will look.

And to be fair, even after the rumor of the day, we still don’t. Over at MCU Cosmic, Jeremy Conrad revealed that he spoke with a reliable source who stated that Peter’s outfit in Far From Home will be read and black, akin to the concept art for the suit in Homecoming, which you can see in the image below: 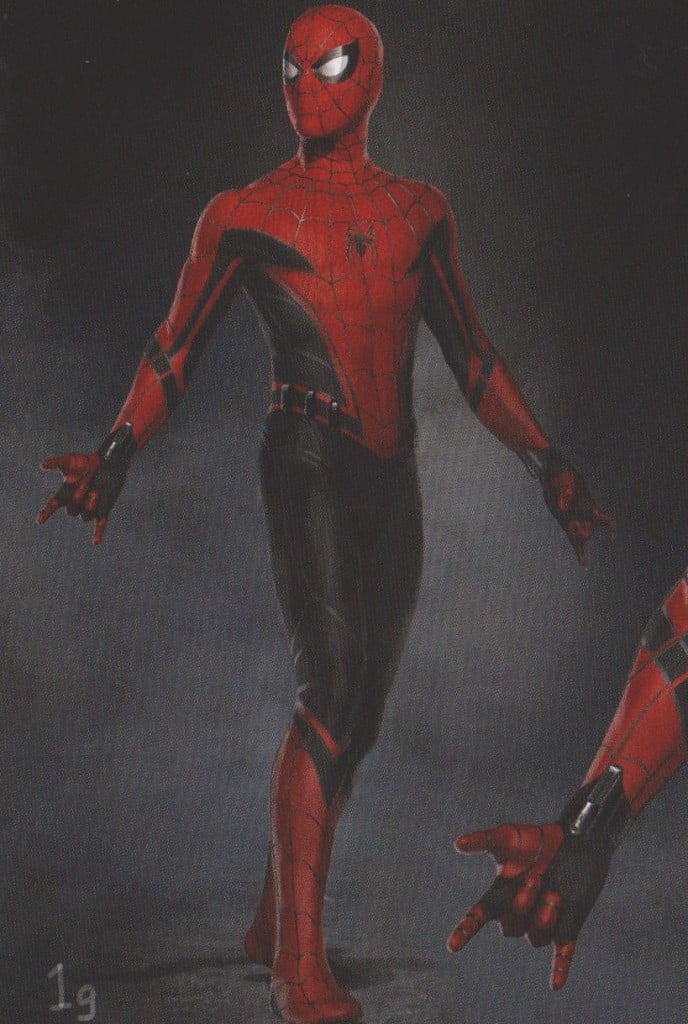 So you just take the blue parts of the Stark suit and dip them in black. Boom. Instant potential Spider-Man: Far From Home suit. And again, this is all rumor territory, so until there’s an official statement or image released, take this with a grain of spider salt. Well, hey, Peter did hack into the Stark suit in Homecoming, so maybe he’d have a way to alter the color scheme. Yeah, you’re right. Probably not.

But what do you think of this potential news? How would you want the suit to look in Far From Home? Let us know in the comments below.