Set in the same universe as Insomniac’s Spider-Man PS4, the new comic book series follows Peter Parker as he plays a role in the final chapter of the Spider-Verse. In Spider-Geddon #0, the wall-crawler visits a bank after receiving a tip from Mary Jane Watson and finds himself in a showdown with Tarantula, a comic book character created Gerry Conway and Ross Andru who debuted in 1974. In true form, the web-slinger insults Tarantula and prompts the villain to respond by saying, “Young, stupid, and arrogant. Easy prey for the Tarantula.” Fortunately, Spider-Man is able to thwart Tarantula by using a web bomb.

You can check out a panel from the comic below! 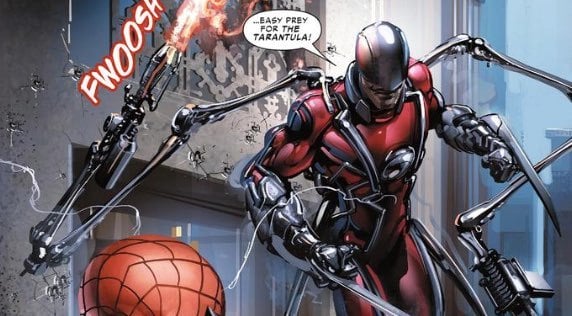 Sony Interactive Entertainment, Insomniac Games, and Marvel have teamed up to create a brand-new and authentic Spider-Man adventure. This isn’t the Spider-Man you’ve met or ever seen before. This is an experienced Peter Parker who’s more masterful at fighting big crime in New York City. At the same time, he’s struggling to balance his chaotic personal life and career while the fate of millions of New Yorkers rest upon his shoulders.