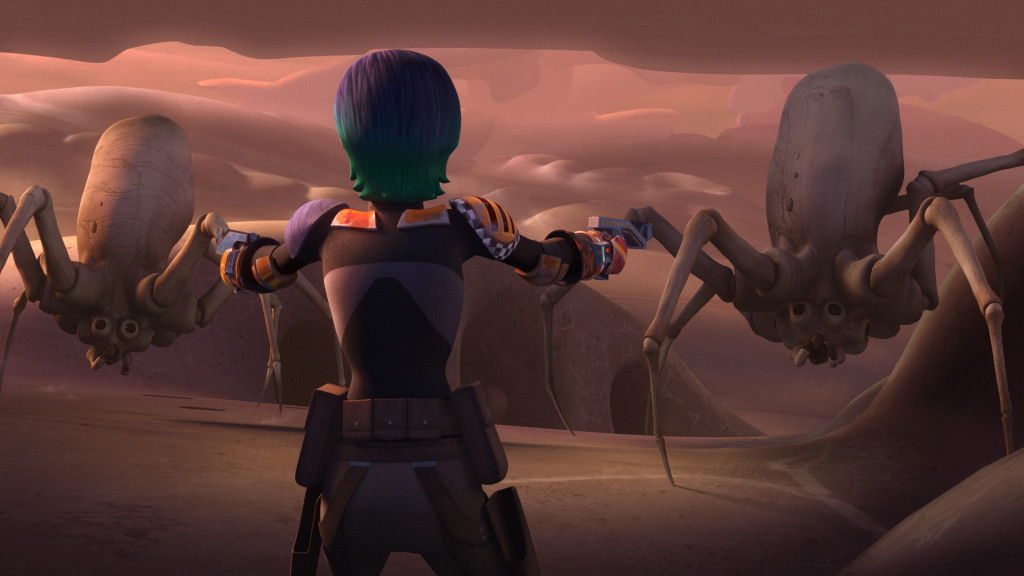 We’re in the home stretch now. Assuming next week’s season finale doesn’t fall flat on its face, the second half of Star Wars Rebels’ second season has been better in almost every way than its first half. Nearly every episode has had a clear purpose in moving the story forward, and even the couple of episodes that could be categorized as ‘filler’ have been loads of fun and played to the series’ strengths rather than its weaknesses. When you’re doing a season of 20+ episodes, some of them are going to be useless padding – that’s just the way it goes – but Rebels front loaded this season with all of its weaker episodes leaving the back half free to really sing.

The only problem is that, as good as the last several episodes have been, all that wasted time in the first half of the season means that Rebels’ race to the finish line is being hampered somewhat by having to set up important character dynamics and conflicts mere moments before they become critical to the story. With the first half of the season squandered, the second half is left having to play catch up.

There’s a lot of that in this week’s episode of Star Wars Rebels. Now that the rebel fleet has found (for the moment, at least) a permanent base of operations, Kanan and Ezra are preparing for their mission to Malachor. As they spar in the cargo hold of the Ghost, there’s an obvious friction between the Jedi. Their playful banter has given way to something a little more bitter and biting, and their demeanors have become more cold and closed off. Despite the fact that the lightsabers are in a non-lethal training mode, there’s an intensity and a ferocity to their sparring that feels right on the edge of being dangerous. It’s genuinely great performance work from both the voice cast and the animators, but the problem is, within the context of the story, I’m not sure where all this is coming from. Kanan and Ezra have had conflicts, disagreements, and misunderstandings in the past, but it’s always been tempered by a bond of respect and kinship; this one is much more chilly. What we’ve seen so far in trailers and clips seems to indicate that Ezra is going to have a brush with the dark side on Malachor next week, so establishing some kind of friction between master and apprentice is important setup, but it’s a setup that feels backwardly shoehorned in. The motivation for this conflict is an event occurring in the future, not one in the past. It’s as if Ezra and Kanan were given copies of the script and told, “Okay, now it’s time for you two to start fighting.”

It’s not unlike the transformation a few episodes ago of Kallus from cackling madman to regretful idealist. Both are interesting character developments filled with exciting story potential, and both would have benefitted from building more slowly over the course of the season instead of being dropped all of a sudden in a single episode. Maybe they could have introduced some of these ideas in the first half of the season instead of going off on pointless adventures with the galaxy’s most irritating space pirate.

But enough crying over spilled milk. Despite these qualms about backwards setups, the character dynamic in this episode is an interesting one. This episode marks the successful conclusion to the season’s main overarching goal of finding a base of operations for the rebels, but far from being a celebratory victory, it’s dampened by a sense of impending doom. Kanan and Ezra are on edge, as we’ve discussed, and Hera observes their preparations with dread. She is terrified of what Ezra and especially Kanan will be facing on Malachor, and yet she knows she can’t stop them from following this through to its end. Instead, she buries herself in her work, becoming distant and reserved as she tries to get things up and running at the rebels’ new base on Atollon.

That work hits an unexpected snag when the rebels discover that they are not alone on this planet. As the rebels are scouting out the perimeter and setting up sensor markers to warn of enemy intruders, one of the scouts stumbles into pack of krykna – giant spiders with an impenetrable armor and a nasty disposition. When Rex goes out searching for the missing lieutenant, he too is taken away by the spiders, and it’s up to the Ghost crew to rescue him. As the rebels descend into the spiders’ nest, there are a couple more interesting character moments. The first comes when the group arrives at a fork in the cave network. The team splits in two, but Hera insists that Ezra and Kanan should go together, leaving herself, Zeb, and Sabine to make up the other group. When Zeb questions her on this, she responds coldly that they “have to get used to not having them around.” It’s an attitude that seems almost heartless, but it speaks volumes about Hera as a character. Hera is the ultimate pragmatist and as much as she cares about her crew, her family, there are bigger things at stake. As much as they are different, here she is like her father. For both Syndullas, the larger causes to which they are devoted supersede even the most personal of loyalties. The fate of the galaxy hangs in the balance, and she can’t let her own hangups get in the way of that. She fears for Kanan and Ezra, but it’s out of her control and the show, as they say, must go on.

And again, this complicated mixture of emotions is conveyed almost effortlessly through the terrific work from both Vanessa Marshall and the animators. This has been true for a while now, but this episode really highlights how well the cast and the animation team have settled into these characters. Week after week we’re getting really high caliber performances out of this show, and it’s something I’m not sure the team is getting enough credit for.

Ezra too is given a moment of interesting character development as he attempts to reach out and establish a connection with one of the krykna spiders through the Force, but he fails to do so. For Ezra, his ability to connect through the Force has been a point of pride. It’s something he has been proficient at, and it’s come in handy on numerous occasions, but with these strange creatures, suddenly he is powerless, and it bruises his ego. Later in the episode, he speaks with Ahsoka about it and the two Jedi discuss the way an understanding of the Force can be elusive. As Ezra admits that he’s never really understood the Force, the music swells with an odd mixture of Ezra’s theme and the ‘Imperial March.’ The implication here is that Ezra’s desire for knowledge will lead to his temptation by the dark side, which I’m not totally sold on as a motivation, but I guess we’ll see how things play out next week.

Before any of that, though, the Lothal rebels have to rescue Rex from the spider cave and fight their way back to their ship. As they’re attempting to flee, they discover that the krykna are repelled by whatever frequency is being emitted by the sensor markers. This realization gives them the tools they need to break through the spiders’ onslaught and escape as well as provide the rebels with a way to keep the creatures from invading their new base of operations.

Upon returning to the base, Kanan and Hera have a heart-to-heart and the two bid each other farewell. It’s almost an unquestionable certainty that someone will die in next week’s season finale, and fittingly the specter of death hangs over this episode like a fog. But it’s not Ahsoka’s death that’s hinted here, it’s Kanan’s. While I still suspect Kanan’s death is inevitable, I don’t believe he’ll be dying this season. Still, there’s no way this season has a happy ending, and something very bad is bound to happen to our heroes next week. Of the three Jedi traveling to Malachor, I expect only one will be returning, and right now my money’s on Kanan. Regardless of what happens, though, the dynamic of the Ghost crew will be forever altered by next week’s events.

And that’s the other part of this episode that’s hampered by missed opportunities in the first half of the season. In this episode we’re meant to feel the sense of dread Hera feels at splitting up the team and sending the Jedi off to an uncertain fate, but nearly every episode in the first half of the season had the Ghost crew divided for completely arbitrary reasons, often at Hera’s own insistence. You can’t have it both ways. If Star Wars Rebels wants us to feel like this impending schism is a big deal, it needed to really build the sense of camaraderie that comes from a unified team over the course of the season instead of constantly splitting them up for no good reason. On an intellectual level I understand the emotions at play and the foreshadowing that is occurring, but on an emotional level, it feels disingenuous because a fractured team has been the status quo for the whole season. When Kanan was captured near the end of Season One, that was painful because the team had never been fractured that way before, but that is something that’s no longer true.

The second half of this season of Star Wars Rebels has done a lot to restore my enthusiasm for the series, but it doesn’t erase the fact that the first 10 episodes were crippled by wasted potential. I’m excited as we head into the season finale and I have every confidence that the Lucasfilm team will stick the landing, but I still wish they hadn’t been so shaky at the start. With a bit more planning and a bit more care, this season could have had an incredibly powerful arc, instead we’re getting a somewhat truncated version of it. But again, it’s all water under the bridge at this point. All we can do is look forward to the future, and I am very much looking forward to next week’s episode. See you all then.