It’s been a great week for Star Wars fans. Following the release of the new Rogue One: A Star Wars Story trailer, Entertainment Weekly has unveiled a new image of Felicity Jones as Jyn Erso. The magazine also had a chance to talk with the actress, who discussed her first meeting with director Gareth Edwards and her introduction to the character. As you’d expect, the whole meeting was shrouded in secrecy:

“We were both working at the time and we met at something like 5:30 a.m. in a hotel restaurant. Most of the meeting was conducted in whispers as he explained the story and the character. My first introduction was definitely one shrouded in secrecy and being very careful no one overheard what we were talking about.”

The actress then went on to talk about Jyn, who she describes as an “unlikely heroine,” since Jones, who’s 5’3″, isn’t who you’d normally expect to see as the lead in a project that’s being described as a war movie:

“She is absolutely a very unlikely heroine. he’s someone on the edges and fringes of society. Physically, she’s smaller than everyone else around her, but… when someone has something they believe in, that’s what powers them, that’s what motivates them, that’s what can give someone enormous strength.”

You can check out the new image below, plus the rest of the interview by clicking here. 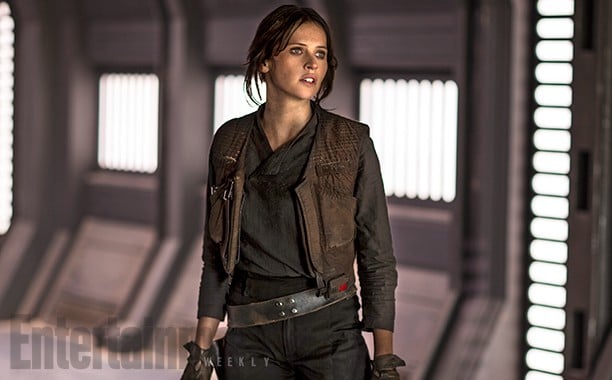