New details from Star Wars: Tales from the Galaxy’s Edge reveal the story of the new VR game as well as the villains players will go up against.

The new Star Wars: Tales from the Galaxy’s Edge VR game takes players to Batuu, the distant world the Galaxy’s Edge park is set on, and a set of new details reveal who fans will go up against. The VR title brings back the Guavian Death Gang from The Force Awakens, with Debra Wilson’s Tara Rashin as the head of this particular group. When speaking to Entertainment Weekly, senior producer Alyssa Finley and Jose Perez III revealed what fans can expect in Tales from the Galaxy’s Edge, explaining players take on the role of a droid repair technician on a cargo ship, with Finley briefly revealing how the adventure kicks off:

“[The game] starts out in absolutely classic Star Wars style. You got some stuff to do that leads to a conflict, and now the Guavian Death Gang is after you. Sorry about that.”

Concept art of the villains show off a vicious fighting squad, with Debra Wilson’s Tara Rashin leading the charge at the front. Fans will definitely recognize the red armor from the scene in The Force Awakens where a few members of the gang try to get money from Han Solo. Wilson explained that Rashin is unrelenting when she’s following an objective, which will most likely make her a formidable opponent during Tales from the Galaxy’s Edge. The game doesn’t have a release date as of yet but it will reportedly arrive this year.

“She runs a tight ship, literally and figuratively. And when she has a goal, she will not take no for an answer and she will never relent.”

Take a look at the concept art of the villains below. 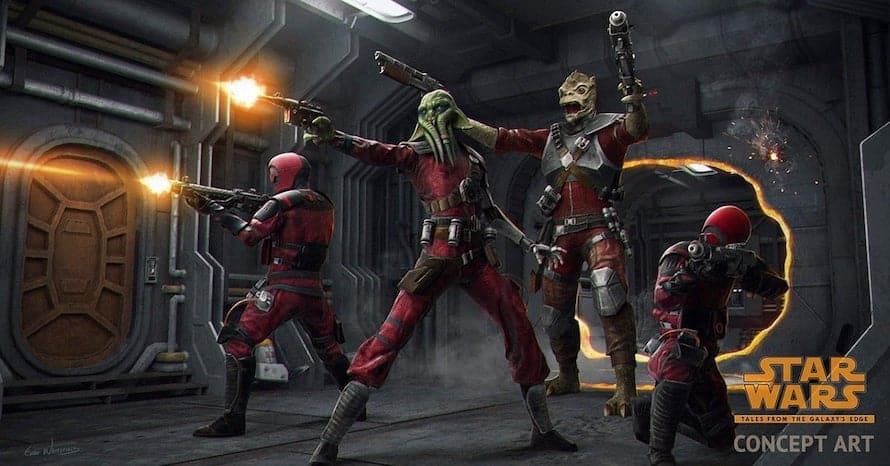 Are you going to get your hands on Star Wars: Tales from the Galaxy’s Edge? Do you like the sound of the villains? Let us know in the comments!

Star Wars: The Rise of Skywalker is now available on Digital HD, 4K Ultra HD, Blu-Ray, and DVD. Stay tuned for all the latest news on the future of the Star Wars franchise and be sure to subscribe to Heroic Hollywood’s YouTube channel for more original video content!