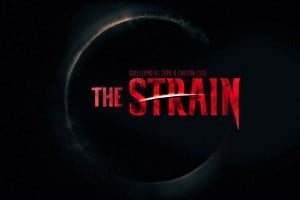 Last week on The Strain, the good guys tried to take the offensive against the Strigoi. By destroying the nest Fet discovered, they believed that would put them at an offensive advantage. Little did they know, they severely underestimated the sheer volume of the enemy. While Fet and company were busy dealing with a few Strigoi underground while looking for the nest, they allowed the night to come and as a result, all the police officers in Central Park were overrun. Eph and Dutch continued to try and discover how Strigoi communications work. The only thing they learned is that there was a large spike of Strigoi communications, signaling that was when The Master gave the order.

During their adventure underground, Fet discovered where Zach was being held and Zach was able to leave a note letting his father Eph know that he was OK. This gives Eph a little bit of hope. As Eph and Dutch make it to the underground lair, he confronts Eichhorst and they manage to cut his arm off, a small consolation from their defeat.

The episode begins reminding the audience that Eichhorst’s hand is still missing. Turns out the Strigoi don’t automatically grow appendages like vampires of other lore. As he burns his stump down and cools it in the water, he’s down but not out for the count.

Tonight’s episode dealt with collaborators of the past and the present.

In the past, we are treated to a flashback of Fet’s grandfather, a soldier from Ukraine during World War II. After getting caught by the Nazis, he surrenders and become a collaborator. This was mainly to save his fellow POW soldier. As the two try to stay alive, they agree to do a special assignment for the Nazis. Who turns out to be the head Nazi? Eichhorst of course. Eichhorst first instructs his fellow POW to murder Jewish prisoners, which he refuses. Then it’s (older) Fet s turn to kill them. He first refuses, but then is forced to or Eichhorst will kill his friend. After killing the poor Jewish prisoner, Eichhorst kills his friend anyway.

The second collaborator the show deals with is Eldritch Palmer, the elderly billionaire who partnered with The Master and Eichhorst to usher in the vampire apocalypse. While The Master temporarily gave him is virility back, it didn’t last long. Now Eichhorst is continuing his plans without Palmer (using Palmer’s resources without his permission) and overseeing a ship from Egypt containing “something.” Palmer is furious he wasn’t involved, and that The Master reneged on his promise of immortality and now is having second thoughts. With his new head of security, Palmer goes to see what’s on the ship, but is blocked by other human collaborators. By the time he comes back with an armed escort, the cargo has moved on.

Meanwhile, Dutch, Eph, and Quinlan venture outside of the safe zone in order to go to JFK airport to retrieve the “black box” to see if The Master’s communications show up on the flight that his coffin came in all way from the first episode from season one. As they brave outside the safe zone, it’s a lawless land and humans desperately turn on each other for survival. Once they make it to the empty airport (save a few Strigoi) they retrieve the black box.

Realizing that he will never get what he needs from The Master, Palmer continues his alliance with Setrakian and reports on the cargo from Egypt. Although he doesn’t know what it is, Setrakian realizes that if it’s from Egypt, which means The Master is making a pact with the other Ancients, which means trouble for everyone in New York City and therefore, America. Setrakian decided to give Palmer one dose of “The White.” Palmer uses the substance and is seemingly cured.
Before we can get to that next week, here are a few of the top moments of the episode. 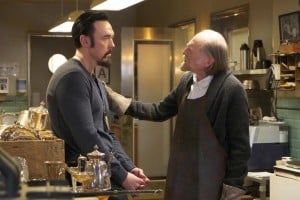 As we’ve said before, The Strain does flashbacks right. Like early episodes of Lost, it gives characters depth that helps move the story forward. This episode isn’t a flashback of Setrakian or Eichhorst, but not even a member of the principal cast. The flashback is of Fet’s grandfather, which informs the audience of why he is the way he is with his father.

Fet and his father were introduced to us having a strained relationship because instead of being an academic (like his father), engineering student Fet ended up “just an exterminator.” His father seemed disappointed with his son’s career choices. Turns out it’s much deeper as a result.

First off, Fet’s last name isn’t even Fet. It was changed to avoid embarrassment from Fet’s grandfather’s involvement in WWII as a collaborator. Fet’s grandfather ended up committing suicide from his shame and his father devoted his life to academics. Fet’s father was disappointed with his son because he chose to be an exterminator, which is what Fet’s grandfather did during the war. It made Fet’s father think that the same darkness in his grandfather was in him as well. After discovering his dead father’s body (after he omitted suicide after being stung by the Strigoi), Fet had to forgive his father to free himself.

As Bad As It Is, It’s Worse Outside The Safe Zone 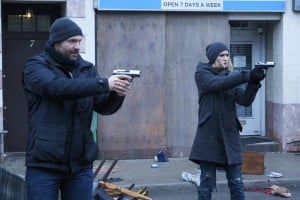 As Eph, Dutch, and Quinlan go to retrieve the black box from the original flight that brought The Master over to America, you quickly see that if you aren’t under what little law and order New York City has, the rest of the city is in chaos. As they drive outside the safe zone, Eph comments it being similar to a third world where disease and greed is the main killer of people. It looks like hell and everyone is struggling for survival.

Dutch leaps out of the car to save a family who are being overrun by hostile people. Quickly a fight erupts where Eph, Dutch, and Quinlan quickly dispatch the family attackers. One key moment that happens is that after they kill the attackers and save the family, they are just as afraid of their saviors as they are of their attackers. This shows that even though they are the “good guys,” this new world has made them just a ruthless as anyone else as they quickly dispatched the attackers.

Palmer Picks A Side 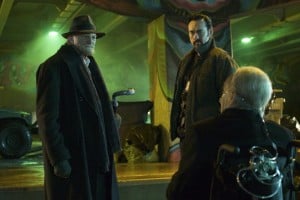 For a little while, Palmer has felt a little maligned by The Master and Eichhorst. They wouldn’t have gotten anywhere near where they wanted if not for the billionaire’s resources in bringing the vampire apocalypse. All that Palmer asked for was immortality and a seat at the table. In a sense, he wanted the same as Eichhorst.

Because he feels like he’s getting the raw end of the deal, he now is having second thoughts. Of course, he’s still selfish and wants to live longer than his quickly deteriorating body will allow, but he now is actively working with Setrakian. Thanks to The White, he now has his new savior. If he does his bidding for Setrakian in trying to stop The Master, he will get more of The White, maybe even get the formula to make it himself.

One other thing to notice, Eichhorst thinks that Palmer has outlived his usefulness. However, The Master still wants him alive, much to Eichhorst’s frustrations. Is he still a candidate to be The Master? We still haven’t see who the new version of The Master is yet. What possible use does he still have for Palmer?

The Good Guys Need To Get Back On The Same Page 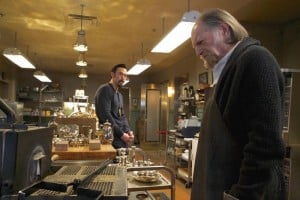 As Eph and Dutch are walking through JFK he comments that this is where it all started referencing when he was called in by the CDC way back in season one. He also comments that it could have been stopped if he just listened to Setrakian way back when. At that time, they didn’t know it an ancient vampire trying taking over the world and Setrakian seemed like just some crazy old man. It’s a little bit of being a “Monday Morning Quarterback,” but it still rings true.

The group is no splintered due to the actions of all of them in their methods of dealing with the Strigoi. Dutch mentions to Eph that he needs to take the first step with Setrakian. The group needs to not be on their own adventures when they are all working towards the same end: the destruction of the Strigoi.

This was a character building episode, so there wasn’t much action compared to last week. Quinlan is still a badass, though.