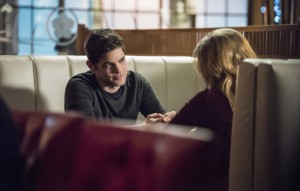 The previous Valentine’s Day themed episode included new developments for the shows various couples as Alex discovered more about Maggie’s past while Kara and Mon-El decided to embrace their feelings for each other. However, the episode also introduced a new paring in Winn and Lyra, an alien from Starhaven, and a new romance immediately began to unfold. In an interview with Entertainment Weekly, series star Jeremy Jordan discussed the new relationship and hinted that it won’t always be a smooth road for the blossoming romance.

Jordan previewed the early stages of the new relationship and teased that Lyra may have some secrets of her own.

“In our world strong-willed women and women who are powerful in their own ways tend to have other things going on, so we find out that there are secrets. But for the first few episodes that we see Winn and Lyra, it’s more about discovering how their relationship fits into this new world that we’re discovering on Supergirl.”

Lyra’s home world of Starhaven has been mentioned on the series before, with Kara even mentioning that she had visited the planet as child, though there is little sign of what secrets Winn’s new love interest may keeping or if she would have any prior relationship to the titular heroine.

What secrets could Lyra be holding and will this spell doom for the new couple? Share your thoughts below!

Supergirl airs on Monday at 8:00 pm ET on The CW. Be sure to check back with Heroic Hollywood after each episode for weekly reviews!