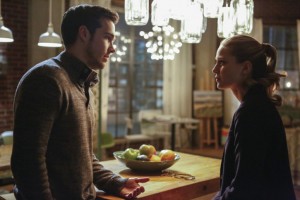 The previous episode of Supergirl concluded with Kara and Mon-El nearly sharing a kiss before being interrupted by the arrival of Mr. Mxyzptlk. While the super powered duo will have to deal with the mischievous imp before moving forward with any sort of romance, series star Melissa Benoist and Executive producer Andrew Kreisberg confirm that they will be entering into a relationship soon. In an interview with Entertainment Weekly, Benoist and Kreisberg previewed their romantic relationship and hinted at the potential turmoil that could befall the new couple if Mon-El’s secrets were to be revealed.

Benoist discussed how the relationship between her sister, Alex, and Maggie helped influence Kara’s decision to try balancing a romantic relationship with her superhero duties.

“Definitely seeing her sister take such a huge leap and really realizing herself that she can have everything she wants, or at least try, it’s worth taking the risk. You can’t just keep yourself guarded to feel like you’re in control, you have to put yourself out there. I do think it’s the kick in the butt for her. Whether or not the timing works out with that, they have real feelings — obviously both of them do — so we’ll see what happens.”

Executive producer Andrew Kreisberg discussed how the early stages of Kara and Mon-El’s relationship will unfold.

When they first get together, it’s just about reveling and being together. Kara is very guarded, she’s always felt distant from people and alone. It’s been hard for her to open herself up, and it took a long time to open herself up to Mon-El, but there’s a comfort being with someone who is also super-powered and someone who is also not from Earth. There’s a lot of synchronicity between them and she takes comfort in that.”

Though there may trouble ahead for the new couple if Kara discovers that the Dominators spared Mon-El‘s life during the duo’s visit to Slaver’s Moon, Benoist reveals that Mon-El’s secrets will initially go unnoticed.

“I think she’s totally oblivious. I don’t think she has any idea. She’s so focused on how much he’s changed and how he becomes so generous, kind, thoughtful, and selfless that she doesn’t realize or have any thought to the fact that he’s keeping something from her.”

Are you excited to see Supergirl and Mon-El take the big step towards romance or is the relationship already doomed? Share your thoughts below!

Supergirl airs on Monday at 8:00 pm ET on The CW. Be sure to check back with Heroic Hollywood after each episode for weekly reviews!