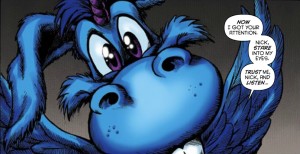 SyFy is ready to get happy. Grant Morrison’s Happy!, to be precise. Though Hollywood has flirted with the property in the past, the genre channel is content to finally realize the project. The station just greenlit the pilot as a limited series. Brian Taylor, one half of Neveldine/Taylor (the Crank films, Ghost Rider: Spirit of Vengeance), will direct the pilot. He’ll also write and serve as an executive producer alongside Morrison.

Happy! follows Nick Sax, an alcoholic ex-cop-turned-hit man who enjoys a life of “casual murder, meaningless sex and betrayal.” You know, the good stuff. But when one hit turns awry, our morally askew lead character finds his life turned upside down when Happy, a tiny, imaginary blue-winged horse, finds itself in his reprehensible life.

Before Taylor’s upcoming take on the material, RZA signed on back in 2012 to direct and produce a film adaptation, but that never came together. Morrison would have also served as a writer on that version.

In addition to Happy!, Taylor and Morrison will also executive produce an adaptation of Aldus Huxley’s acclaimed Brave New World, which was also recently picked up by SyFy. The station also recently picked up pilots for the supernatural series Haunted and a televised remake of 2013 film The Machine. These shows will come under Universal Cable Productions. It’s unclear when they’ll hit television, but it’s safe to assume they’ll arrive sometime in 2017.

Happy! will be Morrison’s first non-Batman/Superman comic brought to the screen. Taylor, meanwhile, is currently finishing up his first solo project, Mom and Dad. Starring Nicolas Cage and Selma Blair, the horror film should hit theaters sometime next year.