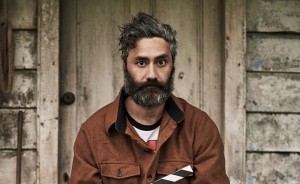 Thor: Ragnarok is well underway at this point. Production started back in July, Mark Ruffalo wrapped almost a month ago, and director Taika Waititi (What We Do in the Shadows, Hunt For the Wilderpeople) reveals he’s nearly halfway done with his first blockbuster. And while Waititi has a while to go before he approaches the finish line, the New Zealand filmmaker is already calling his latest a success — namely because, when he started the upcoming third Thor film, he didn’t know what to expect. Literally.

In an interview with Digital Spy, Waititi gave an update on his impending superhero sequel, while also confessing his lack of preparation for the multi-million blockbuster.

We are halfway through and it’s going really well. Everything is going to plan in that we didn’t have a plan to start with… It’s going better than expected and it’s a lot of fun shooting. The style is not too dissimilar to how I would normally work. It’s just a longer schedule because it’s a bigger film with more special effects and things like that.

As someone with a great affection for Waititi’s indie work, it’s great to see his low-budget work ethic shift nicely into the bigger production. It sounds like he’s still relatively making the film on his terms, which is assuring for a Marvel movie, and it still promises to carry his own zany style, which is certainly welcomed. While some might find their boots rattling from jumping scales so quickly, Waititi came aboard the blockbuster primarily because he was excited by the challenge. He wanted to push himself forward.

I always want to do something different when I make something. I really like the idea of doing something really big. My films have always been a lot smaller…. I like the kind of films I make, but it was an opportunity that presented itself that wouldn’t come around often, so I thought I would just pursue.

While his next project after Thor: Ragnarok remains undecided, Waititi isn’t opposed to returning to blockbusters just yet. He specifically said, “If I do really well with it and people like it and I enjoy the process, then I’d definitely think about doing another one.”

Those are some promising words of encouragement. Of course, Waititi is a somewhat unconventional choice for the material, and that’s partially why I’m very excited to see what he brings to the MCU when Thor: Ragnarok hits theaters on November 3, 2017. I imagine you’re probably pretty excited as well.