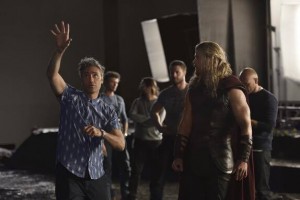 Director Taika Waititi is hard at work as Thor: Ragnarok undergoes the post-production phase and fans are eager to see the God of Thunder’s next adventure. In an interview with The A.V. Club at a Rooftop Films gala honoring him, Waititi discussed his approach to the film’s tone, reuniting with actor Sam Neil and compared the film to Captain America: Civil War.

Waititi revealed that he will have a cameo appearance in Thor: Ragnarok.

“It’s not like a thing that I’ve ever planned, but now I’m in all of my movies in a small role or a larger role. I’ll probably just keep doing that. It’s like a dumb thing I do now.”

Waititi elaborated on earlier comments about how the film will have a more comedic tone than previous Thor adventures.

Waititi briefly discussed reuniting with his Hunt for the Wilderpeople star Sam Neill and teased the actors role.

“He blabbed on the internet, didn’t he? I don’t want to say too much about it, because it’s a really cool little thing that he’s doing.”

Waititi expressed his appreciation for being able to work on a project with a unique set of characters.

“Sometimes I would stop and think, I’m doing a movie that’s got Thor and Doctor Strange and The Incredible Hulk and Loki and every character is so strange and different.”

“Civil War it’s just humans, humans with human problems. Ours is creatures and beings and all these sorts of really different characters. Again displaying human problems, but in outer space or in other worlds.”

Are you excited to see these ‘strange and different’ characters meet? What role do you think Sam Neill will play? Share your thoughts below!