UPDATE: US Navy officials responded to accusations of Tom Cruise’s alleged arrogance on set of Top Gun 2 and denied the claims.

“Tom Cruise and the cast were nothing but gracious and professional during filming to all of the sailors.”

A crew member who asked to remain anonymous previously told NBC 7  that Tom Cruise had allegedly asked servicemembers on USS Theodore Roosevelt not to look at him or touch him either. He said:

The crew member also said that Cruise’s behavior was:

The Navy official explained that “some sailors may have misinterpreted guidance from the Navy that told sailors to not approach actors while filming and not use cell phones on the set.”

The Navy official also assured that it “does not tolerate any disrespect to its members” and “wouldn’t allow” staff to be mistreated.

Members of the US Navy are reportedly slamming actor Tom Cruise for alleged arrogant behavior on the set of his upcoming sequel, Top Gun: Maverick.

Tom Cruise is currently filming for this highly-anticipated follow-up to one of his most iconic roles from the original Top Gun film in 1986. In particular, Tom Cruise is filming on the USS Theodore Roosevelt and apparently, the crew has been ordered not to look at nor talk to the movie star.

Facebook screenshots from numerous US Navy members on board the USS Theodore Roosevelt expressed their dislike of the behavior of Tom Cruise while filming Top Gun: Maverick. 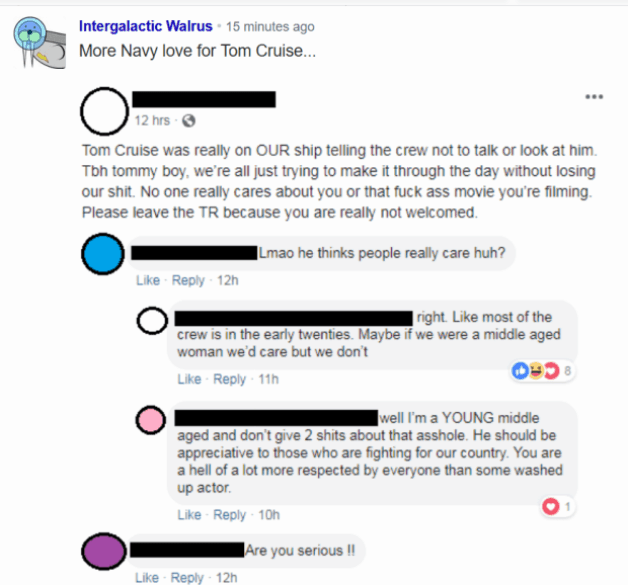 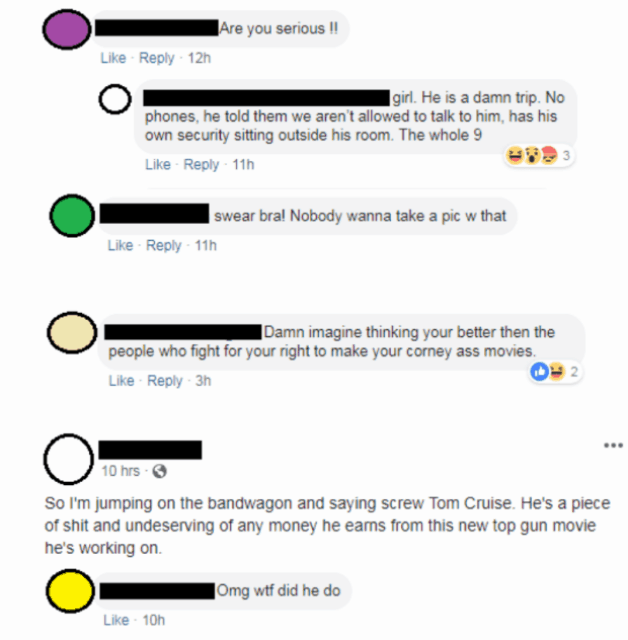 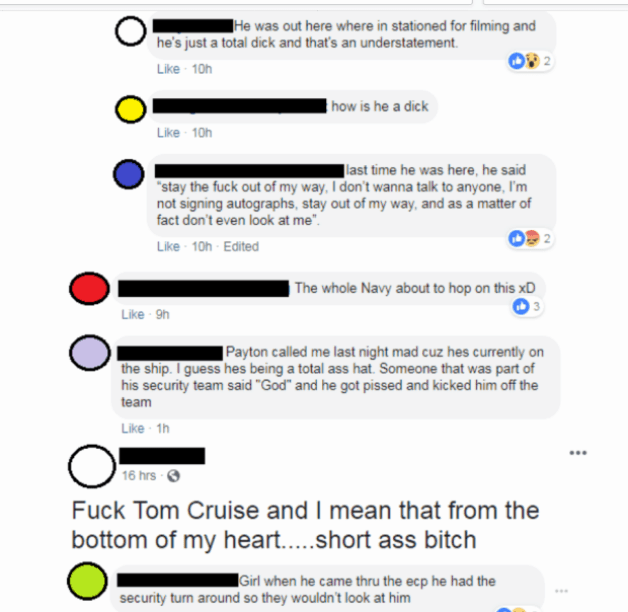 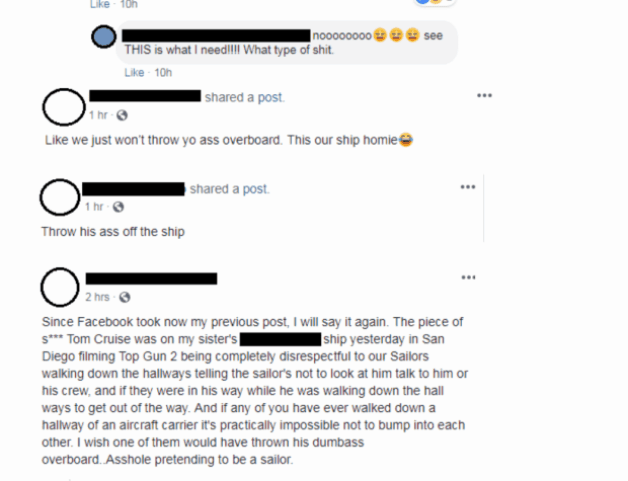 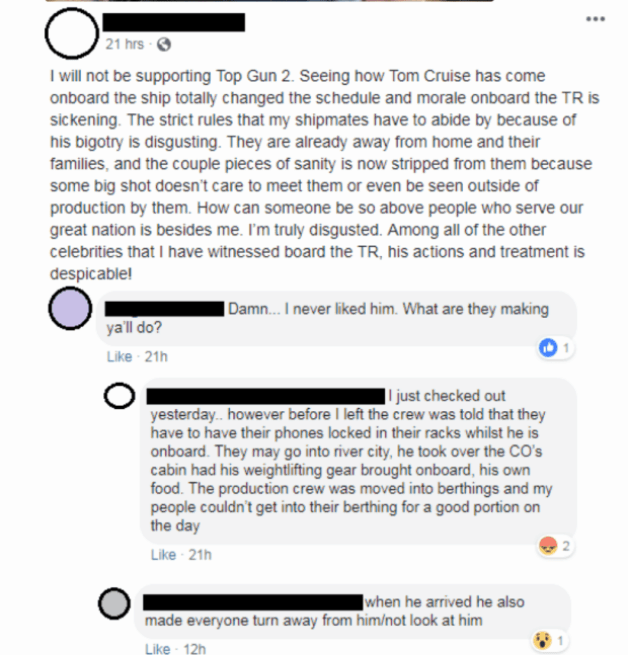 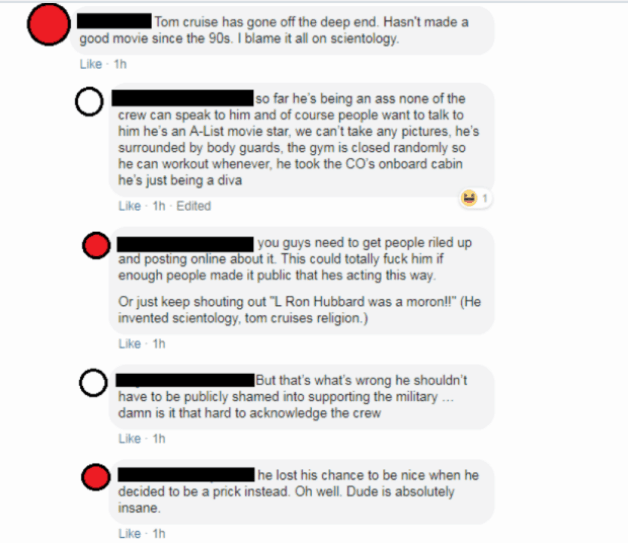 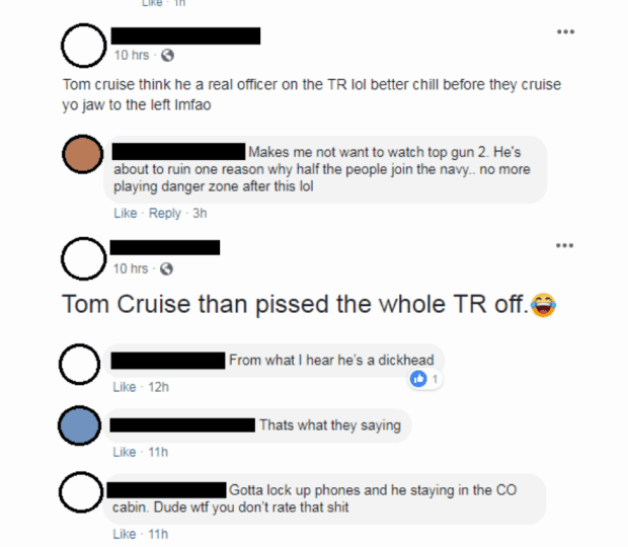 This isn’t the first time Tom Cruise has received heated criticism from US Special Forces. In 2013, the actor made comments comparing his job as a professional actor to be just as, if not more intense than what troops in Afghanistan were going through.

At the moment, no official response has been made by Tom Cruise nor the production behind Top Gun: Maverick as a result of this onslaught of criticism from numerous US Navy crew members.

What do you make of these responses from US Navy members? Will this effect your chances of watching Tom Cruise in the new Top Gun sequel? Sound off in the comments below, and be sure to continue following Heroic Hollywood for all the latest news.

Details on the upcoming film are still hard to come by but we do know that the film will, in part, focus on the first film’s protagonist, Maverick, (Tom Cruise), teaching a new generation of pilots. Val Kilmer is set to reprise his role as Tom “Iceman” Kazansky from the first film as well. The film’s cast also includes Jennifer Connelly as a woman who runs a local Navy bar and Miles Teller as the son of Top Gun supporting character Goose who sadly died in the first film. In addition, Ed Harris and Jon Hamm have been cast as well in unspecified roles. The film is being directed by Tron: Legacy director Joseph Kosinski.

Top Gun: Maverick is scheduled to be released in theaters on June 26, 2020.