Warning: This article contains spoilers for the Venom film.

As you know by now, Sony’s Venom film just hit theaters this past weekend. It’s made a killing at the box office and, despite mixed reception to the film, there’s a lot of setup for where the series can go in sequel films. Case in point, the film’s mid-credits scene where Eddie Brock is invited to have an interview with the serial killer that we all know and love- Woody Harrelson’s Cletus Kasady, better known in the Spider-Man world as Carnage.

Now Venom and Carnage don’t get along at all and throughout his history, Carnage has brought…well, carnage throughout the land, nowhere more evident than in the “Maximum Carnage” storyline. But for newcomers, just who is this serial killer introduced in the very end of the Venom film? Well, based on a display of Eddie Brock’s notebok at New York Comic-Con, fans can get a rundown on just who Cletus Kasady is and what he’ll no doubt bring to the table in a Venom sequel.

‘Venom’ Hints At Controversial Spider-Man Story Fan Might Have Missed

Among his many accomplishments, many of which are ripped right from comic lore, Kasady…killed his grandmother by pushing her down the stairs, set his foster home ablaze, killed a girl who wouldn’t go out with him by pushing her in front of a bus, and like most nutcases in the world of Spider-Man, he’s from New York. And this is all before Kasady comes into contact with the symbiote. Right now, it remains to be seen just how that will happen.

Going off of comic lore, Kasady only got it there because he happened to share a jail cell with Eddie Brock. Once the Venom symbiote entered the prison and re-bonded with Brock, some remaining parts of it were still in the cell after Brock’s escape. And from there, you get Carnage. Now given Brock’s anti-hero role in Venom, it will be interesting to see how, if at all, he may end up either incarcerated or imprisoned- anything that would separate him from the symbiote. At least, not unless somebody has a Sonic Weapon at the ready or the Fantastic Four on speed dial.

Here, have a look at a photo of Eddie Brock’s notebook from the Venom film with his notes on Cletus Kasady:

‘Venom’: Why Riot Was Chosen Over Carnage For Film’s Villain 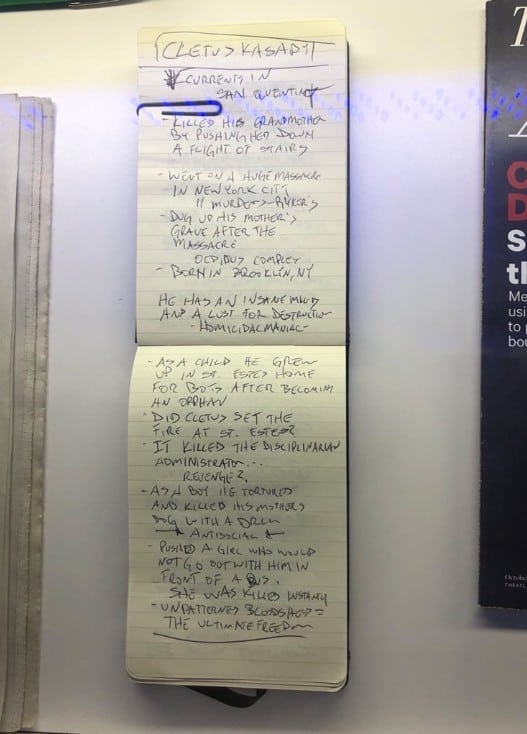 With Sony going full speed ahead with its cinematic universe, with the likes of Morbius and Jackpot also set to receive films, how would you like to see Carnage integrated into the universe? Would you want to see him and Venom have a battle? Let us know in the comments below.