Warner Bros. chair and CEO Ann Sarnoff revealed the studio’s updated logo ahead of its centennial in 2023.

Today, over 500 Warner Bros. employees gathered to watch chair and CEO Ann Sarnoff unveil the studio updated logo on the famous water tower on the Burbank, CA, lot. With the Warner Bros. centennial approaching, Sarnoff made the following statement on the decision to update the studio’s classic shield, which has been part of the company since it was founded in 1923:

“As we approached our centennial, we thought it was the right time to take a good look at our brand, what it stands for and the values it represents. We know that a strong brand gives us not just a roadmap but a sense of purpose.  It puts our feelings of pride into words. And, it helps us communicate who we are to our employees, our creative and business partners, and our fans around the world.”

Warner Bros. also refurnished its mission statement and brand position, “To be the world’s leading creator and distributor of extraordinary entertainment by partnering with the world’s most inspiring storyteller.” Sarnoff continued her statement to reflect on the important contributions filmmakers and storytellers have made to Warner Bros. over the past several decades:

“At Warner Bros., we have been telling stories and entertaining audiences for almost 100 years—but we don’t do it alone. From the beginning, we’ve worked with the world’s best storytellers and helped them bring their visions to life.  It’s their unique genius that connects and inspires us, that introduces us to new ideas, takes us to new places, and reshapes the way we see the world.  They are the heart of everything we do.”

The new Warner Bros. shield logo is expected to start appearing on screen in early 2020. The water tower logo will soon be repainted with a permanent shield.

You can check out the updated Warner Bros. logo in the photo below! 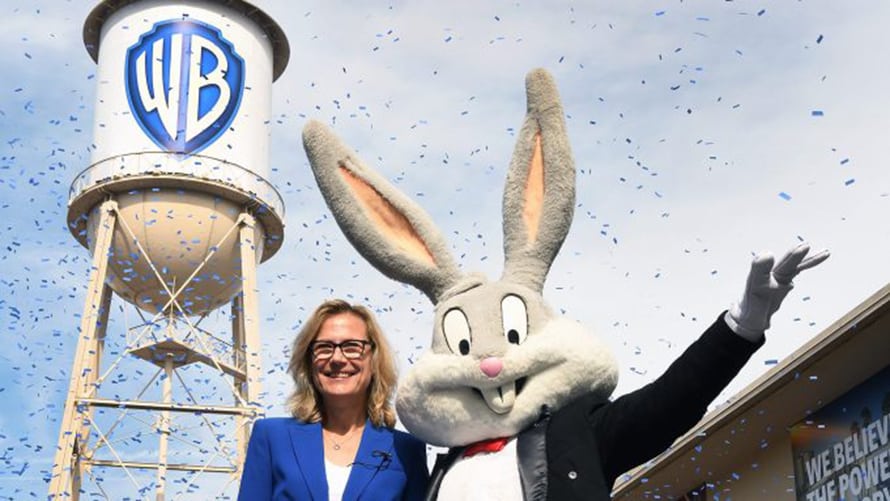 Warner Bros. library of content will soon be available on WarnerMedia’s HBO Max. Previously announced projects being developed for WarnerMedia’s HBO Max include a Dune series centered on an order of women known as the Bene Gesserit, with Denis Villeneuve directing the pilot episode. Furthermore, WarnerMedia’s streaming service will include Gremlins: Secrets of the Mogwai, an animated prequel series revealing the origins of the cute but dangerous creatures.

WarnerMedia is also said to be considering a less expensive alternative version of the streaming service supported by ad revenue next year.

HBO Max is currently scheduled to launch commercially in the spring of 2020 with an anticipated 10,000 hours of premium content.