A “genius, billionaire, playboy, philanthropist” in an iron suit, a Norse god, a WW2 supersoldier and a not-so-jolly green giant are now joined by a bulletproof black man, who fights crime in Harlem costumed in a dark hoodie. For a country with such a checkered racial history and amidst ongoing protests of police shootings of unarmed black men, Luke Cage is the hero we need and deserve at the right time.

Luke Cage (premiering tonight at midnight on the west coast, 3 a.m. in the east) already feels not only like a tangible part of the MCU and its Netflix/Defenders-verse, but also important and timely. It’s hard for pop entertainment to “say” relevant things and often it is neither its job nor purpose. Especially with superhero shows, what you see is what you get. Here however, the tropes we love – arch villains, dramatic rescues, reluctant heroes – are seamlessly melded with black culture, courtesy of showrunner and former hip hop journalist Cheo Hodari Coker. It makes Cage must-see television.

There may have been black superheroes in the MCU before, such as War Machine, Falcon and Black Panther, but never as the lead and not one quite like Carl Lucas aka Luke Cage. He is an ex-con, a fugitive framed for a crime he didn’t commit. With American mass incarceration disproportionately affecting people of color, this is a reality very close to many. Race doesn’t define his character but it does inform who he is, his story and, by all indications, the show too. Coker summed up this up when speaking with Time this month.

“I’m not going to be one of those people who says, I’m a show­runner, I’m not a black show­runner. I’m black when I go to sleep. I’m black when I wake up, period. It doesn’t affect my perspective on everything, but at the same time, it’s who I am, and I’m proud of it.”

Much like Jessica Jones (the show which introduced the charismatic Mike Colter as the character), this show inhabits a perspective so fully in tone and story that it makes it utterly unique compared to Daredevil. Cage, as a character, is no stereotype; he’s notably conservative in demeanor, adverse to slang and and almost frustrating with his inner goodness. In other words, he’s a bit like a less-chaste Captain America.

Diversity has never been more sought behind and in front of the camera. There’s an explosion of diverse content from previously un-heard voices to prove it – shows like ABC’s black-ish, Amazon’s Transparent, NBC’s The Carmichael Show, recently FX’s Atlanta – that go deeper than ever before into marginalized perspectives. Netflix itself has diversified lately with new shows like The Get Down. The Marvel series are a microcosm of that. The aforementioned Jones‘ first season looked very specifically at the character as literal and figurative rape victim, a horror too many women know well. There is so much interest in stories from all represent diverse hires that the decision to cast Finn Jones as Iron Fist instead of an Asian-American actor struck some as a missed opportunity.

But as far as Luke Cage is concerned, their entire main cast is made up of people of color and its supporting cast largely is, too. Along with Colter are Simone Missick as Det. Misty Knight, Mahershala Ali as the villainous gangster Cottonmouth, Alfre Woodard as his politician cousin Mariah Dillard, Theo Rossi as Shades Alvarez, a slippery ex-con and Rosario Dawson, returning as the “night nurse” Claire Temple, the Nick Fury of the Defenders-verse 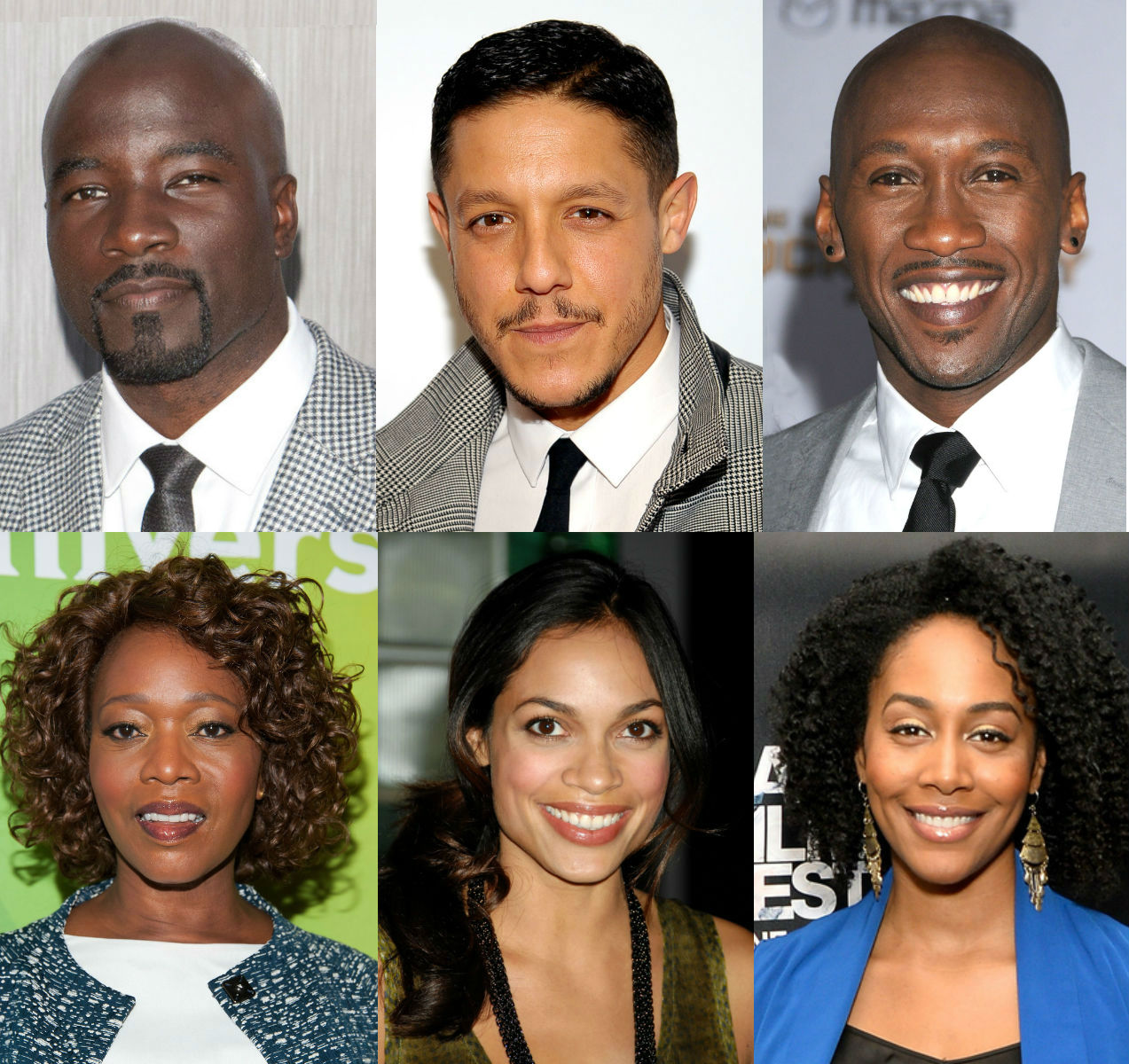 Early reviews say Coker doesn’t stop there. There are numerous references to African-American culture and history sprinkled throughout to further flavor the piece without overwhelming the narrative. Cage is notably reading a Walter Moseley book in one promo and the neighborhood barbershop where he works is home to several discussions of black athletes and black historical figures (one of the villains is based in a warehouse named after Crispus Attucks, the black man known as the first American casualty of the Revolutionary War and later a symbol for anti-slavery).

Few characters are as ripe for reinvention as Cage, a blaxpoitation icon transported to the age of #BlackLivesMatter. The show, by all appearances, is a love letter. There’s unmistakably authenticity, something reinforced by Paul McGuigan, who directed the first two episodes. He tweeted that black photographers, particularly of Harlem, “greatly influenced” the visual style he helped create for the series.

#LukeCage I was greatly influenced by the street photography of Gordon Parks, Tony Ray-Jones and Jack Garofalo. Also check out Khalik Allah.

From the beginning, he wanted to do for Harlem what The Wire had done for Baltimore. It was important to make it feel as messy, intricate and alive as the real thing. Music played a big part. To that end, each episode is named after a Gang Starr song and Cottonmouth’s club has several live performances. Coker likes to think of the season as an album designed to be listened through on a binge.

It’s almost as if Marvel, by shining a light on the sometimes-uncomfortable topic of race, opens up a universe as exciting as the magic of Doctor Strange or Ghost Rider on Agents of S.H.I.E.L.D. That the company, arguably the most trusted brand in entertainment at the moment, is able to have Cage, Strange and the Spirit of Vengeance co-exist under the umbrella of the MCU (and be good!) is, for us comic book fans, nothing short of amazing.

There’s so much to be excited for in Luke Cage, but the way the show has already begun discussions about important issues while maintaining the aura of the coolest, most badass superhero show around is what has me most psyched to watch the show.

What’s getting you pumped for Luke Cage, all 13 episodes of which are dropping early Friday morning on Netflix? Let us know in the comments! And check back tomorrow for our episode reviews as we watch the show alongside you!