Justice League director Zack Snyder has been hit with a copyright claim over his controversial Batman tweet.

Last week, a controversy arose surrounding the animated Harley Quinn series which riled up many across the internet and various message boards. Creator Justin Halpern wanted an intimate scene between Batman and Catwoman, but Warner Bros. shut the scene down as it would reflect poorly on The Dark Knight’s toys sale. It was an odd denial considering that the Harley Quinn series is meant for adults, and is filled with raunchy, mature jokes. Once Halpern revealed that the Batman and Catwoman scene was shelved, a flurry of fans began to protest online, with director Zack Snyder joining in.

Taking to Twitter, Justice League director Zack Snyder shared an image of Batman and Catwoman in the intimate position described by the Harley Quinn creator. Fans rejoiced at Snyder’s stance on the controversy but it appears that Warner Bros. wasn’t a big fan of it. The image, which can’t seem to be found in comic books and was likely commissioned by Snyder himself, was removed “in response to a report from the copyright holder.” In response to the notice, Justice League director posted a screenshot of the copyright notice on Vero with the caption “If I Advance”. It sure is a daring move on Warner Bros. part considering how many DC fans have sided with Zack Snyder throughout the year. 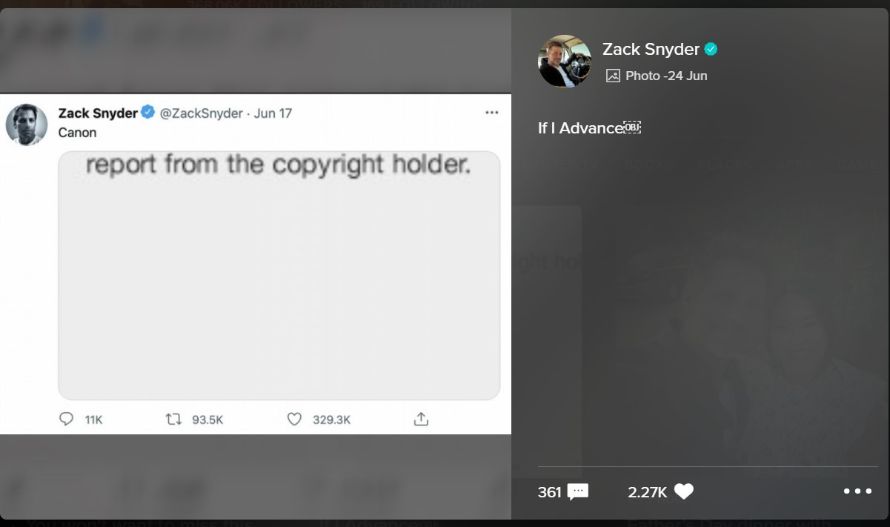 What are your thoughts on the Zack Snyder tweet getting copyrighted? Comment below and let us know!

Here is the synopsis for Zack Snyder’s Justice League:

The Snyder Cut is available on HBO Max. Stay tuned for the latest news regarding Batman and the future of the DC Extended Universe, and make sure to subscribe to our YouTube channel for more content!