In Avengers: Infinity War, Bucky Barnes (Sebastian Stan) reunites with Captain America (Chris Evans) and other numerous Avengers in Wakanda as they face off the threats of the Mad Titan Thanos (Josh Brolin). Despite their valiant efforts, Thanos snaps and succeeds in erasing half of all existence in the universe. The first disappearance onscreen is none other than Bucky, who concernedly asks Cap about what’s happening before ultimately turning to dust.

A brand new incredibly detailed 1/6 scale Hot Toys collectible figure depicts Bucky as seen in the film. While the figure itself is quite cool, the most interesting feature of this figure is that it includes his disintegrating arm as he falls victim to Thanos’ plan.

You can check out a photo of this Bucky Hot Toys figure: 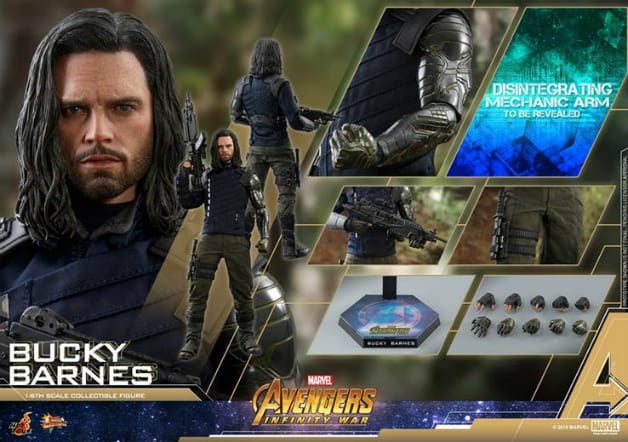 Pre-orders for this Bucky Hot Toys figure can be made on the official Sideshow Toy website with shipments expected to occur next Summer.

New ‘Spider-Man: Far From Home’ Suit May Be Based On Unused Concept Art

Here is a tentative synopsis for the follow-up to Avengers: Infinity War: