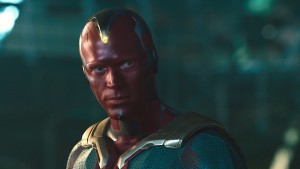 Avengers: Infinity War will feature the ultimate showdown between the Marvel Cinematic Universe heroes and the sinister Thanos, who will step up his mission to obtain the Infinity Stones. Yesterday, fans were given a first look at Paul Bettany as The Vision filming on location in Edinburgh, Scotland, though few details on the scene could be parsed from the image. Now, a set video from the location has been posted, offering details on the scene and hinting that The Vision could be in great danger.

The short clip was captured by Twitter user Mundo Vengador and features The Vision knocked-out on the ground, presumably after a feud with the unknown assailants, just before he is lifted away.

You can check out the footage in the post below!

Chris Evans Still Up To Playing Captain America After ‘Avengers 4’

Fan can only speculate on what has just occurred in the video, though considering The Vision is empowered by one of the Infinity Stones being sought by Thanos, it is possible that the Mad Titan has found The Vision and intends to extract the Mind Stone from our hero. However, the assailants appear to be surprised by The Vision’s sudden ascension, perhaps suggesting that The Vision’s allies have rescued him just in time.

Avengers: Infinity War will be directed by Joe and Anthony Russo with a script written by Christopher Markus and Stephen McFeely.