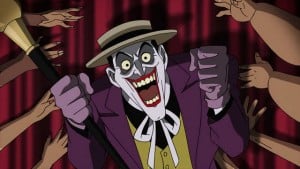 We’re in the age of R-rated Batman, ladies and gentlemen. It was just a few weeks back when Batman v Superman: Dawn of Justice Ultimate Cut made its ways onto the public, and we’re now only a few weeks away from Batman: The Killing Joke, the second R-rated Batman film ever. Kinda crazy how close these two are from one another, isn’t it? Fans have been more receptive to Zack Snyder’s newest cut (I’ve been meaning to see it, but I haven’t gotten to yet…), and we’ll see if fans warm up to this darker take on the Dark Knight, especially when it makes its world premiere at San Diego Comic-Con later this month. But if this new clip is any indication of quality, it’s stacking the deck for something really special.

Although this new clip, released under DC Entertainment’s YouTube channel, is fairly brief, it unquestionably sets the tone for this moodier, bleaker take on the familiar DC characters. The short peak, which sees our Caped Crusader paying a silent Joker a visit in Arkham Asylum, lets you know immediately that this tale isn’t necessarily going to be kid stuff, and those familiar with Alan Moore’s source material know that’s certainly the case. We’ll have to see for ourselves when the film comes out on July 26 digitally (and August 2 on Blu-Ray and DVD).

In the meantime, take a look at the clip below and let us know your thoughts. The actual clip starts around the 3:40 mark, FYI.