Fans of the magazine will be getting a look at Captain Marvel before she is set to come in and help the Avengers in the upcoming conclusion Avengers: Endgame. The superhero will be debuting in her solo film as she will be introduced to the Marvel Cinematic Universe and fans around the world. As we get closer to the release of her film, we have a new look at her in this new cover where she seems to stand as a shinning beam of hope. You can view the new cover below: 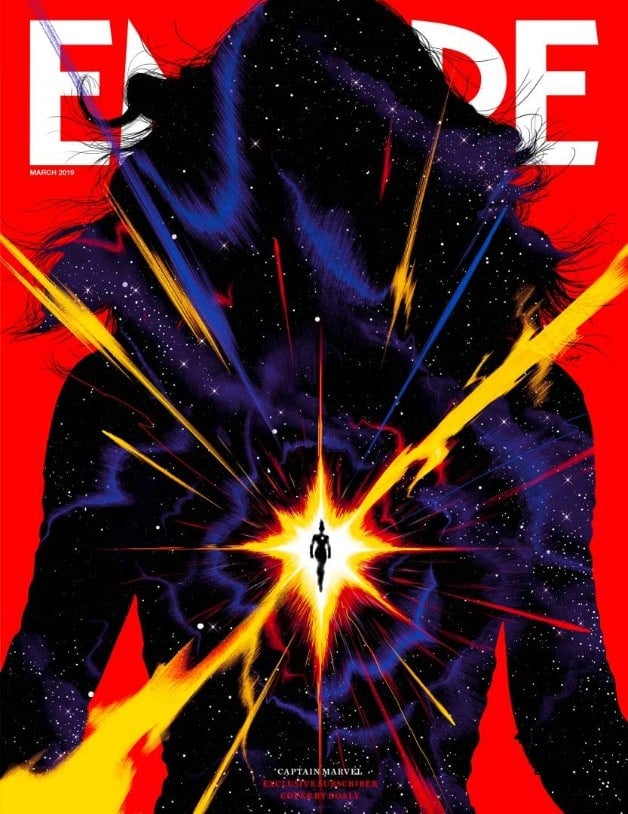 Here we see Carol Danvers/Captain Marvel in the subscriber cover designed by Doaly. The cover seems to have a lot of detail as to who Captain Marvel is. The outer image seems to be of Carol Danvers with a silhouette of the hero in costume right in the center. The silhouette is in space with many stars around it which could be in reference to her coming from another world.

Jake Gyllenhaal On His Role As Mysterio In ‘Spider-Man: Far From Home’

What do you think of this cover? Are you looking forward to Captain Marvel? Share your thoughts below!

The Superhero Movies Of 2018, Ranked From Worst To Best

2018 has gone by too fast. It seems like yesterday when the beginning of the new year was upon us, and the advent of having so many superhero movies hitting theaters seemed like a dream come true for every fanboy and fangirl. It’s also funny to look back and remember that although we ended up with a whopping nine major theatrical superhero movies, we almost had eleven. Sadly, Fox delayed both Dark Phoenix and The New Mutants to 2019 instead.

Even with those two films delayed, 2018 was still a massive year not just at the box office, but for the continued advancement of the genre on a number of levels. Whether it was through the cultural significance of a film like Black Panther or the exciting animated adventures of Incredibles 2 and Spider-Man: Into the Spider-Verse, there was no shortage of exciting superhero stories told on the big screen this year.

Here are the 9 theatrical superhero films of 2018, ranked from worst to best.

Yeah, Venom is an interesting film to say the least. Many have doubted Sony and their plans to create their own universe centered on Spider-Man villains that is said to be “adjacent” to the Marvel Cinematic Universe, especially after what happened with their proposed plans for a shared universe set within the canon of Marc Webb’s The Amazing Spider-Man films.

What director Ruben Fleischer brought to audiences is this bizarre, clunky, yet surprisingly entertaining throwback to the early 2000s era of superhero cinema. It has major narrative and technical flaws that keep it from being legitimately a “good” film beyond some moments of ironic brilliance, but Tom Hardy’s performance is one of the most entertaining comic book movie performances put on screen in a long time.

It’s pretty hard to follow in the footsteps of such a massive crossover event like Avengers: Infinity War, but the microscopic (yes, pun intended) scale of Ant-Man and the Wasp is a nice lighthearted cleanser after witnessing Thanos’ decimation. It falls short of its 2015 predecessor, but director Peyton Reed still brings in some entertaining sequences that are a nice blend of action and comedy.

Both Paul Rudd and Evangeline Lilly have great chemistry, and the entire climactic chase sequence is pure delight.

2016’s Deadpool was the surprise hit of that year. While many hardcore comic book fans were excited to finally see a proper iteration of the Merc with a Mouth, the industry was particularly surprised by how mainstream audiences embraced Ryan Reynolds as the beloved antihero of the Marvel Universe.

Deadpool 2 continues that trend of self-aware comedy mixed in with the badass action directed by David Leitch. Unfortunately, the film falls into some of the trappings of a “more of the same” type of sequel, but put on a bigger scale. The film certainly could’ve benefited from a more clever script beyond just making everything bigger than the first. While the film never recaptures that lightning-in-a-bottle that the first film had, it still holds its own with some great character moments and perhaps the best mid-credits scene of all-time.

Plus, the additions of Cable (Josh Brolin) and Domino (Zazie Beetz) add more to the irresistible tone that Deadpool brings to the big screen. Overall, a decent sequel.

6. Teen Titans GO! To the Movies

It’s kind of funny that Teen Titans GO! To The Movies is as entertaining as it is. Sure, the film is still targeted towards younger children that tune into the series on Cartoon Network, but the film is a surprisingly clever send-up of both the superhero movie genre as well as a hilarious tribute to the lore of DC Comics seen through the eyes of the Teen Titans themselves.

Also, the fact that the film ends with a stinger that teases the possible return of the original Teen Titans series justifies its existence in more ways than one.

Aquaman is a much-needed win for the DC Extended Universe. The franchise received its biggest win in 2017 with Wonder Woman but unfortunately hit a massive roadblock with the disappointing Justice League. As it turns out, all the DCEU needed to do to get back in the right direction was to add water and filmmaker James Wan into the mix.

Wan really goes all out with this film. This is a visually stunning adventure film on both land and sea that really leans into the inherently cheesy nature of the character while simultaneously turning Aquaman into perhaps the most badass superhero in the DCEU thus far.

Some may be turned off by how campy Aquaman can get at points, but it’s hard not to get swept up into the fun when you have Jason Momoa having the time of his life.

It has been 14 years since we were last acquainted with the Incredibles. Thankfully, they haven’t missed a beat even after that long, long wait for the most-requested Pixar sequel of all-time.

It’s great to see Brad Bird bounce back with this exciting sequel after the earnest, yet disappointing mess that was Tomorrowland. Here, Bird is back on his element as a brilliant storyteller and is adept at further developing these characters.

Seeing the entire family in these hilarious and death-defying circumstances is so enthralling, particularly in the film’s climax. Also, everything involving Jack-Jack and Edna Mode are some of the funniest sequences of animation that Pixar has ever done.

What else is there that needs to be said about this 2018 film? It really is the most ambitious crossover event in cinematic history, and it has sparked an entire year-long conversation about what our surviving heroes will be doing next after all the chaos.

Anthony and Joe Russo accomplished the near-impossible task of balancing out dozens of larger-than-life characters in this kaleidoscope of comic book beauty that leads to some of the most epic battles ever brought to the big screen.

Also, with Avengers: Endgame on the horizon, it’s going to be interesting if that film has a moment that tops the pure awesomeness that is the scene in which Thor (Chris Hemsworth), Groot (Vin Diesel) and Rocket (Bradley Cooper) arrive on the battlefield in Wakanda.

2. Spider-Man: Into the Spider-Verse

Who would’ve thought that an animated Spider-Man movie that features Spider-Noir and Spider-Ham on the big screen would be the best film centered on the webhead since Sam Raimi’s Spider-Man 2?

Leave it to the minds of Phil Lord and Chris Miller along with the incredible creative team to bring us a true love letter to the character that would make Stan Lee and Steve Ditko proud. Yes, Peter Parker will always be our original Spidey, but this film proves that the best part about being Spider-Man is the fact that he/she can come from anywhere despite their personal background and circumstances.

As big as Avengers: Infinity War was, it’s harder to find a 2018 movie that has had as big of an impact on the popular culture than Black Panther. But beyond the cultural significance that comes with such a film, Ryan Coogler crafted a powerful, touching story about legacy, family, principles, power and purpose.

It’s hard to log onto the internet sometimes because the world is in such a chaotic place. But Black Panther represents the power of storytelling and why seeing more diverse characters and stories on the big screen matters.

Films like Black Panther remind us about the power of cinema. It can unite audiences together despite their differences and can also inspire us to be better people. All those reasons and more are why Black Panther is the best superhero film of 2018.