Jude Law leads a team of Kree warriors in a new image from next year’s Captain Marvel.

Captain Marvel hits theaters next year to introduce fans to Carol Danvers (Brie Larson) before her powerful character arrives to help Earth’s Mightiest Heroes in Avengers: Endgame. Danvers won’t be the only iconic character that fans will be introduced to in the film. For quite some time, Jude Law’s role in the film was kept a mystery but many fans assumed that he would be playing Mar-Vell, the original Captain Marvel.

It was recently confirmed that Jude Law will be playing Mar-Vell in the film. The character made his debut in Marvel comics all the way back  in 1967 and now Fandango has released an image from the film that gives fans a new look at Mar-Vell alongside his fellow Starforce members, including Danvers. Check out the intriguing new image below. 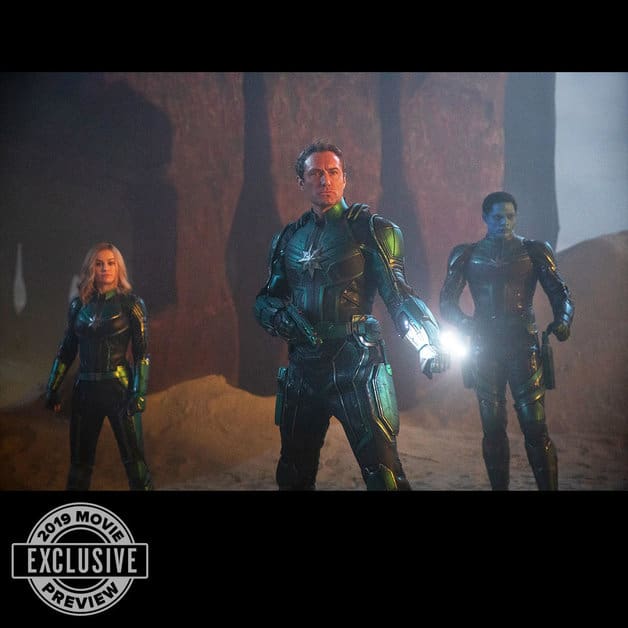 Captain Marvel lands in theaters on March 8th, a little over a month before the release of Avengers: Endgame. It won’t be the only Marvel Cinematic Universe solo adventure hitting theaters next year though. In July, Sony will be releasing their highly-anticipated follow-up to 2017’s Spider-Man: Homecoming, which is titled Spider-Man: Far From Home.

We’ll be sure to keep you updated on all news regarding Captain Marvel as soon as more information becomes available. Which upcoming MCU film are you most excited to see? Let us know your thoughts in the comments below!