Elizabeth Olsen’s WandaVision just reintroduced a shocking hero to the Marvel Cinematic Universe which brings up questions about the multiverse.

Warning! Major spoilers ahead for the latest episode of WandaVision!

The first four episodes of WandaVision have been met with a mixed response so far, some audiences loved the idiosyncratic nature of the series and praised the strange new direction from Marvel Studios, while others felt the opening few chapters were a little too odd without enough payoff. But the most recent episode ended with such a shocking cliffhanger, it pulls the entire MCU into question. Mainly, did Elizabeth Olsen’s Scarlet Witch just pull someone through the multiverse? Again, if you haven’t seen the episode, look no further as we’ll be discussing the reappearance of a shocking Marvel hero.

‘WandaVision’ Reveals What Happened To This ‘Captain Marvel’ Character

After several mentions of Pietro Maximoff (A.K.A. Quicksilver), the ending of WandaVision sees the hero reappear in Westview. However, it isn’t the version of Pietro played by Aaron Taylor-Johnson in Avengers: Age of Ultron – but Evan Peters, from the Fox X-Men films. In his brief appearance, it’s not clear whether he’s aware of his X-Men past, or if he’s another Westview resident who has been ‘recast’ as such for Wanda’s new reality – like Darcy Lewis suggested. One thing’s for certain,  the Avenger’s look of surprise suggests she didn’t intentionally bring this Pietro back. But if Scarlet Witch has pulled the Fox hero through the multiverse, surely this is a sign for what’s ahead in future Marvel films.

This could easily be a way of setting the stage for both Spider-Man 3 (remember, Tobey Maguire and Andrew Garfield are reportedly reprising their respective Wall-Crawling roles) and Doctor Strange in the Multiverse of Madness – since Elizabeth Olsen will star in the sequel. It’ll be interesting to see how Wanda reacts to this new version of Pietro and how long it’ll take her to realize that he isn’t the right version of her brother. Will other previous X-Men heroes make an appearance? Does Quicksilver remember his other teammates? Will Aaron Taylor-Johnson return? Only time will tell. Take a look at Evan Peters’ Quicksilver return in the Elizabeth Olsen series below. 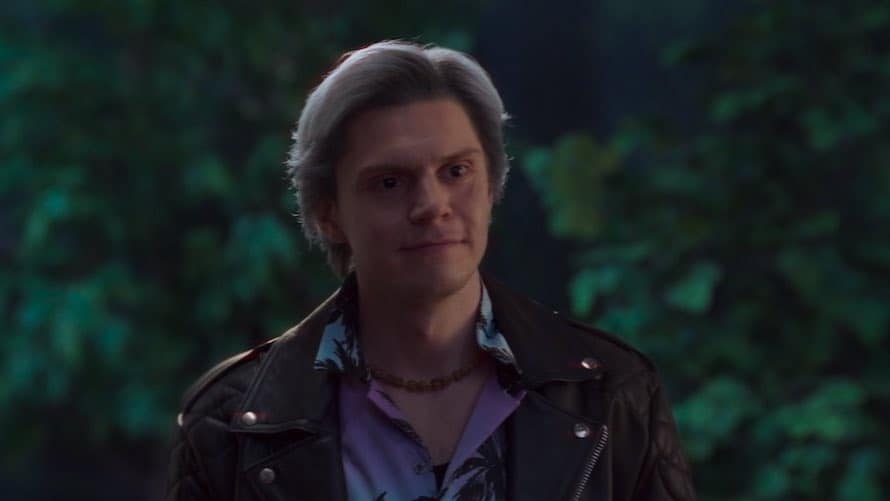 What did you make to Quicksilver’s apparent return? Did you like seeing Evan Peters come back to the role? What does this mean for the X-Men in the MCU? Sound-off in the comments below!

‘WandaVision’ Star Emma Caulfield On Going From ‘Buffy’ To Marvel

Read the official synopsis for WandaVision below.

Matt Shakman directed the series with Jac Schaeffer as the lead scribe; WandaVision will star Elizabeth Olsen as Wanda Maximoff/Scarlet Witch, Paul Bettany as The Vision, Teyonah Parris as Monica Rambeau, Kat Dennings as Darcy Lewis, Randall Park as Agent Jimmy Woo, and Kathryn Hahn in an undisclosed role. The President of Marvel Studios has said that the series leads into Doctor Strange in the Multiverse of Madness.

WandaVision premieres on Disney Plus every Friday. Keep following along to stay up to date on all of the latest news surrounding Elizabeth Olsen, Evan Peters, the X-Men and the Marvel Cinematic Universe’s future, and subscribe to our YouTube channel for more content!