Gilbert Gottfried who voiced Iago in Disney’s Aladdin isn’t too happy about a new actor voicing the role in the upcoming live-action remake of the animated classic.

Alan Tudyk was revealed to have joined the cast earlier today, voicing the role of Jafar’s sidekick Iago. The reveal itself gave way to some displeasure online from fans who voiced their disposition over Gilbert Gottfried not returning for the remake of the 1992 children’s film. Gilbert Gottfried himself got behind the uproar and retweeted several of the tweets from fans who expressed their frustration with Disney’s decision. 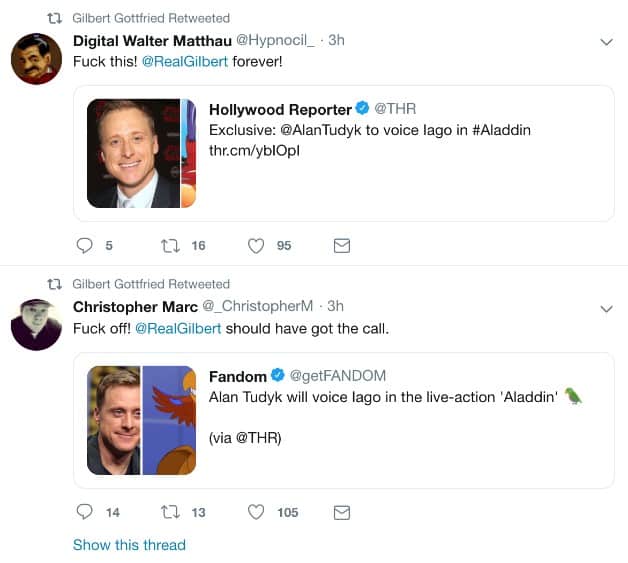 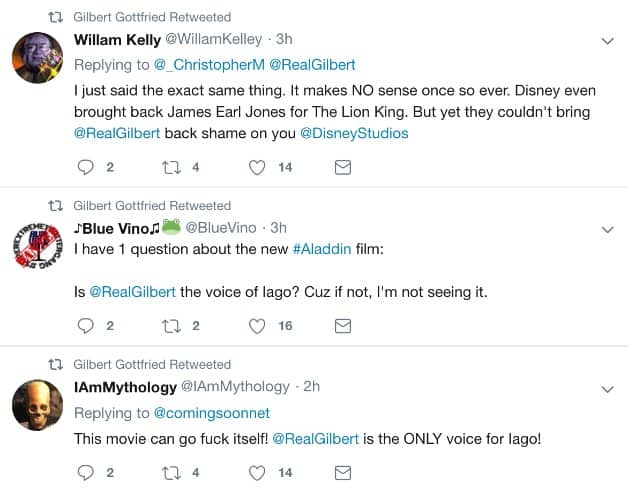 Gilbert Gottfried not being asked to come back shouldn’t come as a great surprise to fans, considering out of the many live-action remakes from Disney, James Earl Jones is the only actor asked to reprise his iconic role as Mufasa in Jov Favreau’s The Lion King which is set to hit theaters this summer.

As for Aladdin, Guy Ritchie has directed the film from a script written by John August (Big Fish) and Game of Thrones writer Vanessa Taylor. August and Ritchie are also producing the film with Dan Lin. Marc Platt (La La Land) and Chris Montan (Frozen) are consulting for the project with Jonathan Eirich (Deathnote) serving as executive producer.

But what do you think? Are you upset Gilbert Gottfried isn’t coming back for Aladdin? Or are you happy to see a whole new cast behind the live-action reimagining? Let us know in the comments below!

The new film features a whole new cast with Mena Massoud who stars in the titular role of Aladdin, as well as Will Smith as the Genie, Power Rangers star Naomi Scott as Jasmine, Numan Acar (Homeland) as Hakim, the head of the guards and Jafar’s right-hand man, and Marwan Kenzari as Jafar. In addition, the live-action remake features new characters made just for the film played by Billy Magnussen (Game Night) and former Saturday Night Live comedienne Nasim Pedrad.