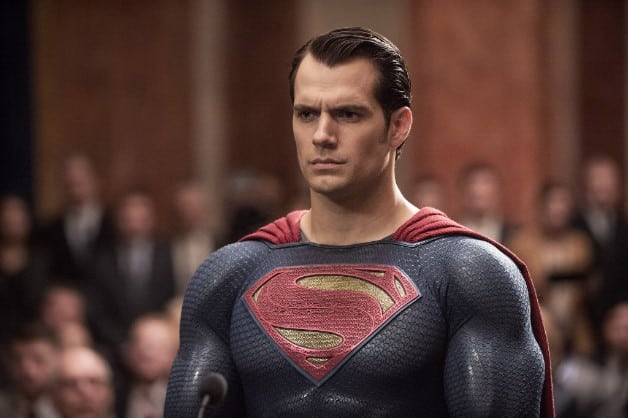 This is not a Joke. A newly released behind-the-scenes image from Justice League reveals Henry Cavill as Superman with his very problematic mustache.

Henry Cavill’s Superman mustache from Justice League was at the center of controversy when the film hit theaters. The mustache had to be CGI’d out of Justice League to give Henry Cavill the classic Superman look and it was definitely a travesty. Fans around the globe were terrified when they saw Henry Cavill and his upper lip in Justice League. If you were ever wondering how he looked pre-visual effects nows your chance to see Superman with his mustache in all its glory. Check out the image below.

In the meantime, Cavill will trade in his Superman costume for the lead role on Netflix’s adaptation of The Witcher. Based on the fantasy series of novels and short stories by Andrzej Sapkowski, Netflix’s The Witcher will follow the monster slayer for hire named Geralt of Rivia. Showrunner Lauren S. Hissrich will also serve as an executive producer on the series while Alik Sakharov, Alex Garcia Lopez, and Charlotte Brändström are on board as directors for the eight-episode first season.

The Witcher stars Henry Cavill as Geralt of Rivia, Freya Allan as Ciri, Anya Chalotra as Yennefer, Jodhi May as Queen Calanthe, Bjorn Hlynur Haraldsson as Eist, Adam Levy as Mousesack, MyAnna Buring as Aretuza, and Millie Brady as Princess Renfri, with Mimi Ndiweni and Therica Wilson-Read as novice sorcerers. The series will debut on the streaming service later this year.

Although the next Superman film hasn’t been announced or slated yet, or if Henry Cavill will reprise his role, Supergirl is one of the many projects being developed over at Warner Bros. and DC. The studio has tasked Oren Uziel to pen the script. Meanwhile, Superman is still rumored to cameo in the Shazam! movie, but it’s unclear if it will be Henry Cavill in the role.

Justice League is now available on Blu-Ray, DVD, and Digital HD. Stay tuned to Heroic Hollywood for the latest news on the future of the Justice League members.