James Gunn hasn’t spoken to Mark Hamill about a role in Guardians of the Galaxy 3.

Director James Gun recently took time to answer questions from fans on his Instagram page, and when asked if he was in talks with Mark Hamill for a role in Guardians of the Galaxy 3, the filmmaker denied that talks were even taking place. With James Gunn’s Guardians of the Galaxy 3 on hold until he finishes The Suicide Squad, many fans are trying to guess what the story will be to keep them going until he eventually starts production on the Marvel film.

While many fans are expecting to see Adam Warlock or the High Evolutionary in James Gunn’s Guardians of the Galaxy 3, it doesn’t seem like Mark Hamill will be appearing in the film at all. When asked if he was still in talks with the Star Wars actor, the director explained that they were friends and that they’ve never had those talks. James Gunn has enough on his plate as he shoots The Suicide Squad, so it may be some time before casting news surfaces about the Marvel sequel. Take a look at the director’s response about Mark Hamill appearing in the film below. 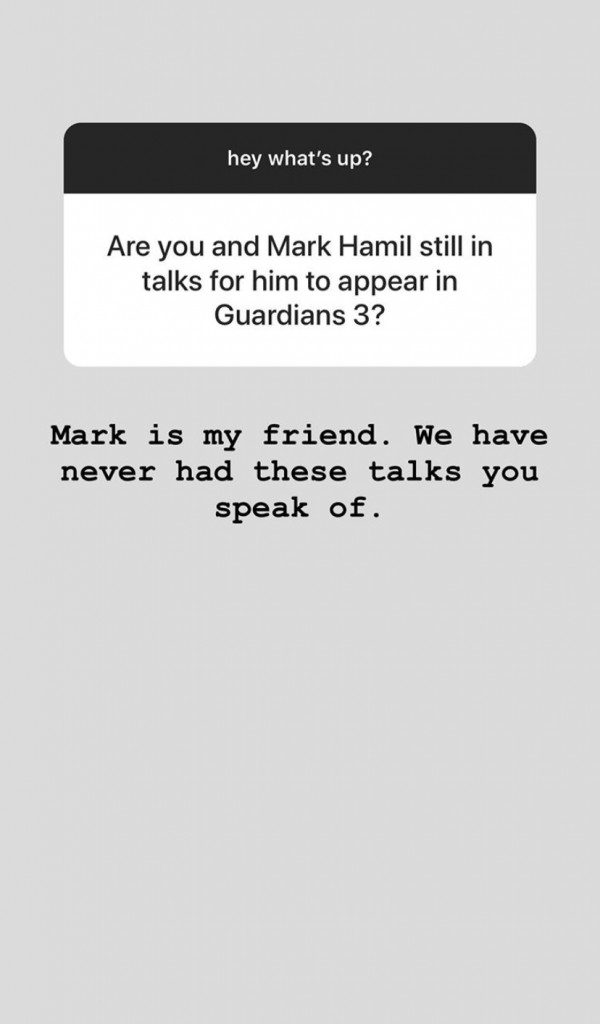 Are you still hoping to see Mark Hamill appear in James Gunn’s Guardians of the Galaxy 3? Who would you want the Star Wars actor to play? Let us know in the comments!

James Gunn’s Guardians of the Galaxy Vol. 3 is expected to star Chris Pratt, Zoe Saldana, Dave Bautista, Vin Diesel, Bradley Cooper, Karen Gillan, Pom Klementieff, Elizabeth Debicki, and Sean Gunn. Chris Hemsworth’s involvement is speculated upon, due to Thor joining the Guardians of the Galaxy at the end of Avengers: Endgame, but it has yet to be confirmed by Marvel Studios or James Gunn.

Stay tuned to Heroic Hollywood for the latest updates on James Gunn’s Guardians of the Galaxy Vol. 3 and Mark Hamill.