Avengers: Endgame promo art and trailers haven’t just featured the team in new costumes, but donning new wrist devices as well. How the intriguing wrist technology will work into the story of Avengers: Endgame is still unknown but thanks to a new Hawkeye figure from Hot Toys, fans can get an incredibly detailed look at the mysterious device.

Jeremy Renner’s Hawkeye will undergo somewhat of a transformation in Avgengers: Endgame. As fans can see in trailers for the film, Jeremy Renner’s archer hero will don a new costume and weapon when he takes on his new Ronin persona. Check out an up-close look at the Hawkeye toy’s wrist tech below. 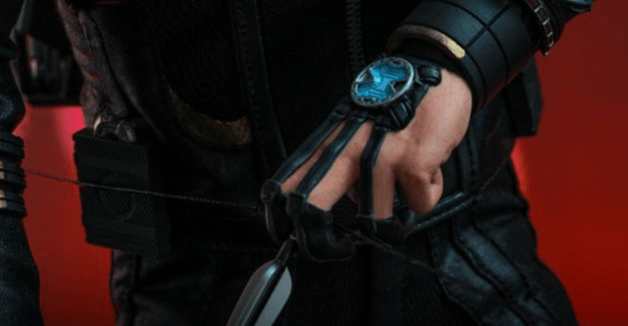 Check out the Hot Toys website for multiple photos of the awesome Hawkeye figure, as well as additional Avengers: Endgame figures.

We’ll be sure to keep you updated on all news regarding Avengers: Endgame as soon as more information becomes available. Are you looking forward to the return of Jeremy Renner’s Hawkeye in Avengers: Endgame? Will you be picking up any of the incredible Avengers: Endgame Hot Toys figures? Let us know your thoughts in the comments below!