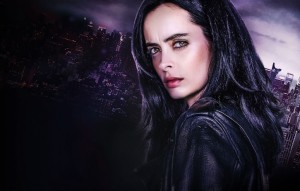 When Iron Man 3 director Shane Black revealed that he was forced to change the film’s villain due to concerns that female action figures would not sell, Jessica Jones star Krysten Ritter was prompted to push for an action figure based on the title character. It appears that her efforts are paying off as Loot Crate has unveiled a brand new Jessica Jones figurine through Entertainment Weekly.

The figurine features Jessica kicking down a brick wall and will be included in April’s Loot Crate box.

You can check out the figurine below!

What do you think of the figurine? Share your thoughts below!

A release date for Jessica Jones season two has not been announced, but Krysten Ritter will reprise the role in Marvel’s The Defenders.

“Marvel’s The Defenders” follows Daredevil, Jessica Jones, Luke Cage and Iron Fist. A quartet of singular heroes with one common goal – to save New York City. This is the story of four solitary figures, burdened with their own personal challenges, who realize they just might be stronger when teamed together.

Marvel’s The Defenders is set to debut on Netflix in 2017.