Director Todd Phillips’ Joker is set to offer audiences a new take on the classic Batman villain, but it appears some familiar locations from the comics will still exist in this version of Gotham, though with a few alterations. For example, the teaser trailer for Joker reveals Arkham Asylum has been named “Arkham State Hospital” in a shot showing Joaquin Phoenix’s Arthur Fleck making his way towards the building.

You can check out a shot of Arkham below. 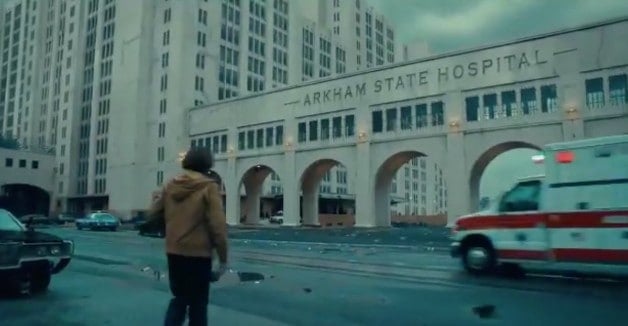 Warner Bros. is looking to tap into Scorsese classics such as Taxi Driver and Raging Bull, with the Joaquin Phoenix film set in a gritty and grounded 1980s Gotham City. Todd Phillips is directing the standalone piece, which is said to be separate from the DC Extended Universe in an effort to create new and unique storylines to expand the canon.

Phillips also wrote the script with Scott Silver, the man behind the 2002 drama film 8 Mile starring Eminem. The project is said to focus on the Clown Prince of Crime as a failed 1980s comedian who becomes The Joker after bombing with audiences.

Are you excited to see Joaquin Phoenix’s take on the Joker? Let us know below!

“Joker” centers around the iconic arch nemesis and is an original, standalone story not seen before on the big screen. Phillips’ exploration of Arthur Fleck (Phoenix), a man disregarded by society, is not only a gritty character study, but also a broader cautionary tale.