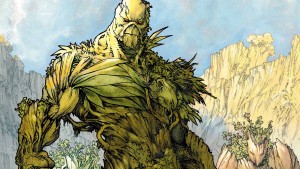 My familiarity with Swamp Thing is limited. I’ll admit this upfront. I’ve never read the comic, I’ve never seen the films, and I certainly haven’t played any of the video games. I’m also not the biggest Joseph Kahn fan. While I admire what the director tries to accomplish with his films, including Torque, Detention and last year’s short film Power/Rangers, they have never connected with me.

With that said, I wasn’t necessarily bummed to see his Dark Universe film, which would promptly feature Swamp Thing himself, fall to the waste side. But as Kahn releases some scrapped test footage from the unmade blockbuster on his personal Vimeo page, I’ll admit that I’m a little intrigued.

The footage, a mere eight seconds, is far from riveting. It just shows a CG Swamp Thing loudly walking in front of a black background, but its attention to detail, sound and movement is what I find interesting. There’s a real weight and physicality to his walk, the way it hasn’t been seen in the character prior. It looks more like one of the trees from The Lord of the Rings than what was seen in Wes Craven’s original movie, sure. But the use of CG adds layers that certainly weren’t found in the original B-movies, and it makes the character feel more like the original comic creation than what we’ve seen before. At least, as far as I can gather.

It’s impossible to know how it would work in conjunction with the rest of the film — particularly under Kahn’s direction — but it provides a nice little what if, especially for those who are, indeed, fans of the comic book character.

Kahn is not the only one who tried to bring this story to the screen. Guillermo Del Toro also famously attempted, and similarly failed, to make it happen in 2013. And while the film has come to life, it has been done in animation form instead of live-action — the way Kahn and Del Toro would have made it — and is set to come to DVD, Blu-Ray and Digital HD under its new title, Justice League Dark, later this year. For more information on that upcoming film, look no further than here.