A brand new image from Disney’s upcoming live-action adaptation of the animated classic Aladdin features the first look at an iconic moment shared in the film between Mena Massoud’s Aladdin and Princess Jasmine played by Naomi Scott.

The image itself, released by Empire features the first meeting between Mena Massoud and Naomi Scott in the film when Aladdin and Princess Jasmine come face to face for the first time after she sneaks out of the Palace of Agrabah.

You can check out the new image of Naomi Scott and Mena Massoud in Aladdin below. 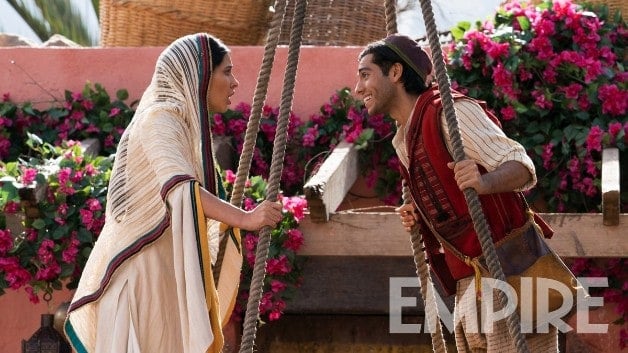 In addition to the image of Aladdin and Princess Jasmine, producer Dan Lin also revealed Naomi Scott will have a much stronger character journey in the new film compared to Princess Jasmine in the original 1992 animated film:

“In the original movie, it felt like [Jasmine] didn’t have as compelling a goal. Her main aim was to find the love of her life. In this case, the romance is important, but she also wants to see more of Agrabah, and take more of a leadership role in ruling the city. Her character has a much stronger journey.”

So what do you think? Are you still excited for the release of Aladdin after the reveal of Will Smith’s blue Genie? Do you think Mena Massoud and Naomi Scott will make a good Aladdin and Princess Jasmine? Let us know what you think down in the comments below!