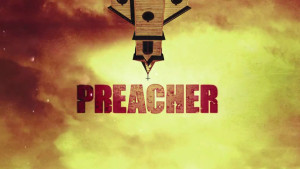 The cast and crew of AMC’s Preacher have gone to hell and back throughout this ongoing season. What’s one stop to San Diego’s Comic-Con throughout the madness? Moderated first by executive producer Seth Rogen and then Kevin Smith, stars Dominic Cooper, Ruth Negga, Joseph Gilgun, Ian Colletti and Graham McTavish were welcomed to the proceedings, along with fellow executive producers Evan Goldberg and Garth Ennis, who is one half the comics’ creator alongside Steve Dillon. The event took place from 6:30-8:30 PM PST Friday night, and they took a rather unorthodox approach during their time in Hall H.

Rather than spend the whole time reminiscing and tossing around stories, they decided to use their opening half to host a live reading of this Sunday’s episode, which we will have a recap for after its 9 PM EST premiere. In the meantime, why don’t you read the last recap? It won’t bite. Hard.

The cast, of course, played their respected roles in the ninth episode reading, while Smith, Jason Mantzoukas and Danielle Panabaker filled in for a few absent cast members and Rogen read some screen direction. No spoilers are available at this time, nor should they be. But it should be noted that utterances like “Root (W. Earl Brown) continues to eye-fuck him in the rearview” earned some hardy laughs, while the image of a still-burned Cassidy (Gilgun) elicited some respected groans. Rogen, additionally, also took a chance to criticize Gilgun’s mellow line reading at one point during this event, noting a key moment features Cassidy at “the angriest we’ve ever seen him.” So that’s something to look forward to on Sunday.

Following the reading, Smith took over by saying to the present cast and crew: “You all are doing the lord’s work, man!” He continued with saying, “Everyone who’s read the comic, or the trade paperbacks, said somebody’s got to make this a movie or TV show.” In the 20-year process to bring Preacher onto the screen, both big and small, Smith was one of many people who attempted to make that transition possible. Smith said the following regarding his one-time involvement, “They put my name on it, and nothing fuckin’ happened, man!” It took “two kids from Canada” to bring it to life once-and-for-all. Those “two kids from Canada” are, of course, developers Rogen and Goldberg. They directed the first two episodes and co-wrote the pilot with fellow creator and showrunner Sam Catlin.

One of the most interesting revelations brought to light came from Goldberg, who noted that the original idea was to do an issue-by-issue adaptation. This idea was shut down by Ennis, who said it would be a mistake because “it just didn’t time out.” They wouldn’t have enough material for “the fifteen seasons of Preacher we want to do.” It’s hard to tell if he’s joking or serious about the 15 seasons plan. Once the opportunity came to change things up, that’s when a few altercations were made towards the characters of Tulip (Negga) and John Custer (Nathan Darrow), the father of our lead character, Jesse Custer (Cooper).

“I realized early on that they were going to have to mess with the comic and I was okay with it,” Ennis said. “I maintain that I only confirmed the conclusion Evan and Seth had already come to, that there was only going to be a season and a half worth of material.” Rogen boosted Ennis’ confidence by retorting, “it would have been an amazing season and a half, though.” The developers also “wanted to give the characters, until they enter the main story, their own visual aesthetic,” and that’s certainly the case with the Saint (McTavish). “It’s like that thing where you start watching a show and you wonder if you’re actually watching the wrong show — that’s something to strive for,” Rogen said. That’s certainly true from the first couple episodes we’ve seen.

Later, when asked about their favorite scenes, Ennis talked about how he loves that “they solved all of the storytelling problems from the comics.” Elaborating, he continued by stating, “They’ve found plausible reasons for things I just chucked in. Things that work in comics don’t necessarily work when you see them acted out on film. These guys have solved all those problems and I applaud them.”