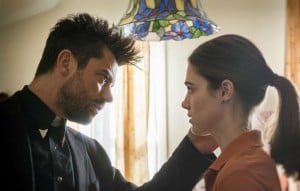 Preacher has officially settled. That’s not a bad thing, mind you. But for those of us who liked the frantic looniness of the pilot, we can’t help but be a little bummed. Nevertheless, Sam Catlin and his team, including fellow developers Seth Rogen and Evan Goldberg, know what they’re doing. They’re smart guys and, more importantly, they’re smart storytellers. There’s always one foot hanging out the door, waiting for the other shoe to drop at any moment’s notice. It doesn’t always make for the most fascinating television, particularly during this not-bad-but-not-quite-great fourth episode, but it continues to fuel the fire. Hopefully, though, things really start cooking again pretty soon. It’s starting to get a little cold.

As per usual, “Monster Swamp,” like every episode, starts out in a bizarre fashion. We follow a young, blonde, scantily-clad woman named Lacey, who is getting chased down by a bunch of gun-wielding tough guys all while she’s wearing nothing more than a sleeve-less shirt and a pair of yellow underwear. She’s not running for her life, though, as we learn that she’s actually participating in an extreme game of nighttime one-sided paintball with few workers from the local Quincannon Meat Packing Plant, and it looks like this is some sort of twisted tradition-of-sorts for both the factory boys and the whorehouse girls. While this young woman isn’t exactly running for her life, she soon finds death is awaiting her that dark night as she careless falls into a shockingly deep hole, which kills her upon impact. The men are confused; the women are heartbroken, including Tulip (Ruth Negga). But while this might seem like a general freak accident at first, it turns out that something fishy might be up with Odin Quincannon (Jackie Earle Haley), especially as he tells his employees that they need to cut out their rough-housing and the nearby girls that they need to watch where they step at night during a removal and memorial of the recently deceased. Is that what we’re supposed to learn from this tragedy? Of course not, and Tulips smells bullshit immediately. Nobody else seems to notice or care, though, because “it’s Chinatown.” And so it goes.

Of course, she’s told to keep quiet, but that’s not Tulip’s style. The “being told” part, not the quiet thing, I mean.  She wants some answers, but she’s not quick to find them. Speaking of answers, we then learn a little more about our mysterious men-in-suits-and-cowboy hats, DeBlanc (Anatol Yusef) and Fiore (Tom Brooke), two men from Heaven who are in a Hell of their own. They’ve come from the man upstairs to retrieve the elusive spirit trapped with our titular preacher, Jesse (Dominic Cooper), as we learned before, but apparently they never quite got the okay from the boss. They’re on a bit of a rogue mission, for reasons not quite addressed yet, and it appears that they have a direct telephone line to their main man, which they’re quite nervous about ringing. They know what they need to do, sorta: they need to grab Jesse, set him down and extract the spirit, either with a chainsaw (like these) or by playing his favorite song. You know, basically the same thing. And then they need to put it in a discarded coffee can, for whatever reason. Just a normal, everyday mission.

Without permission from God, they only have one hope for this to happen: Cassidy (Joseph Gilgun), their mutual correspondent. He’s promised to talk with Jesse about their predicament in broad strokes, and he’s holding up that end of the bargain, but he’s not really successful in pleading his/their case. If anything, Jesse thinks Cassidy is on another one of his crazed rants, speaking his general drunken gibberish that comes with a complimentary Irish accent. So it appears that DeBlanc, Fiore and Cassidy are all in a bit of a funk. But they’re not the only one with problems. While Jesse has this incredible power that’s well beyond his general comprehension, understanding or full control, he know he can use it to save people, even if he can’t quite wield it or use it to his full advantage. He’s knows it can do a lot of good, especially for his small, humble Texas town, and he knows it can finally bring the masses back into their pews, the way his father (Nathan Darrow), the preacher before him, could so easily every Sunday morning. And as we see from a couple brief flashbacks, it looks like things weren’t always clean and moral with Jesse’s dad, which may have lead to his untimely reunion with his maker.

But Jesse is determined to make it work in his place of worship, and he knows how to bring them back: with a local raffle of a flatscreen TV, with a ticket available for everyone who agrees to attend mass. Including Odin, after Jesse convinced the heartless sinner that he can make him believe, once-and-for-all, that there’s a good, or else the land developer can have his trusted estate. And it does draw a crowd, and as we see, Jesse might be on to something. He does successful bring Odin onto the side of God after using his otherworldly powers, and we’ll have to see next time where that leads things. For a man who made a habit to regular watch smut films in his workplace and literally piss on the mayor’s conservative energy plan, this is clearly going to be an adjustment. He might need a Hail Mary to make it work. He’s certainly going to need a little more than faith to follow through on his new course-of-action.

Similar to last week’s installment, “Monster Swamp” is a set-up episode, a build-up to all the good stuff we know it set to come in the next six-or-so episodes in the season. It’s not exactly bad, like I said before; it just doesn’t have the pulp and spice found more regularly in the first two episodes. But intentionally so. It’s saving the good stuff for later, but in doing so, it makes things a little too dry for its own. It promised the goods, and now it’s keeping them a little guarded, a little more reserved. They’re shelving what they need to, and that’s not a problem but it keeps us reaching for something that’s not set to come for at least a week or so, and that’s kinda frustrating. But we know there’s some good stuff to come, and now we just have to hope the build up is worth the wait. I’m convinced that’s the case, at least, and I’m going to keep on believing. If that doesn’t happen, though, so help me God…

In the meantime, let’s look at this week’s top five moments.