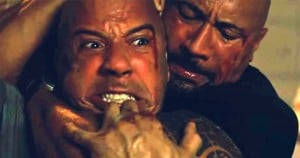 Earlier today, Dwayne “The Rock” Johnson surprised the Internet when he stripped away his normally gracious attitude to call out some of his “candy ass” male co-stars in Fast & Furious 8 (a.k.a. Fast 8). Since Johnson wasn’t specific in his attacks, fans have speculated wildly as to who these “candy asses” might be. Scott Eastwood’s name seems to come up more than most, although nearly everyone with XY chromosomes in the forthcoming action film were brought into question.

However, few have directed their fingers towards Vin Diesel, the star/producer who has appeared — or, at least, is set to appear — in seven films within this franchise. But if recent reports can be believed, that may, indeed, be one of the men The Rock is calling out — if not the man in particular.

This news comes from TMZ, so perhaps take it with a healthy grain of salt. That said, unnamed production sources claim Diesel and Johnson have met in secret to hash out their differences. In the Facebook post, Johnson claimed publicly that some of his male co-stars were “too chicken shit to do anything about it,” but if these new updated reports are to be believed, Diesel is going to give it his best shot anyway. Johnson is also apparently unhappy with Diesel’s story contributions, claiming decisions he agreed upon as a producer “didn’t sit well” with his bulked-up co-star.

TMZ went as far as to claim that “tensions were running so high it was almost impossible to shoot scenes,” but note that they don’t know if they’ve resolved their heated issues. Before this newest report, the tabloid gossip website also claimed that nearly every male star in the action sequel is peeved at the wrestler because they’re all subjects to speculation and hounding from people wanting to know the truth about the situation.

There’s only a week-and-a-half of production for the F. Gary Gray film; The Rock is set to finish filming later this week. Things will likely get even more heated in the days to come. We’ll keep you updated with the latest news. Meanwhile, Fast & Furious 8 is set to hit theaters on April 14, 2017.