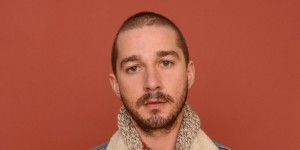 Shia LaBeouf left the Hollywood system after 2011’s Transformers: Dark of the Moon, opting instead for indies like Nymphomaniac: Vol. 1 & 2 or bizarre art projects such as #ALLMYMOVIES. But LaBeouf isn’t afraid to return to the blockbuster scene for the right cause, it seems. He almost made his way into this summer’s Suicide Squad, returning to work with his Fury writer/director David Ayer. But not everyone wanted him involved, which took him out of the project, according to a recent Variety profile.

Promoting his upcoming fall release American Honey, which is reportedly excellent, LaBeouf revealed that he was sought for the role later filled by Scott Eastwood before the actor’s troubling public image caused concerns for those in the studio. Before you imagine LaBeouf in Eastwood’s role, it’s clear that the character wasn’t the same in its initial presentation as it was in the final film.

Here’s LaBeouf quote regarding the latest DCEU release, as it was written in Variety.

The character was different initially. Then Will [Smith] came in, and the script changed a bit. That character and Tom [Hardy’s] character [later played by Joel Kinnaman] got written down to build Will up.” LaBeouf says the studio vetoed his casting. “I don’t think Warner Bros. wanted me. I went in to meet, and they were like, ‘Nah, you’re crazy. You’re a good actor, but not this one.’ It was a big investment for them.

These quotes fit in line with Suicide Squad‘s ever-evolving journey to the big screen. Of course, every blockbuster has a long journey to the big screen, so there are always sharp turns and quick changes from script-to-screen. LaBeouf’s involvement in the blockbuster is not unlike many others in past studio projects. That said, it’s safe to say LaBeouf would have given more presence in the role than Eastwood did, who ultimately barely registered in the final product. But I guess we’ll never know for sure.

In the meantime, don’t count on LaBeouf starring in many tentpole projects in the future. The actor doesn’t have fond memories with the Transformers sequels, Indiana Jones and the Kingdom of the Crystal Skull, Disturbia or Eagle Eye, and in reflecting on his work in those projects — especially in his involvement with director and/or producer Steven Spielberg — he had the following to say.

You get there, and you realize you’re not meeting the Spielberg you dream of. You’re meeting a different Spielberg, who is in a different stage in his career. He’s less a director than he is a fucking company…. Spielberg’s sets are very different. Everything has been so meticulously planned. You got to get this line out in 37 seconds. You do that for five years, you start to feel like not knowing what you’re doing for a living.

LaBeouf said the only movie he liked making with Spielberg was the first Transformers film. He also felt Kingdom of the Crystal Skull hurt the most because he prepped for a year-and-a-half for his supporting role, then got blamed entirely for the final film. “That shit hurt bad,” he said.

All that said, it’s fun to imagine what LaBeouf could’ve done in Suicide Squad. In the meantime, however, American Honey hits theaters on September 30.